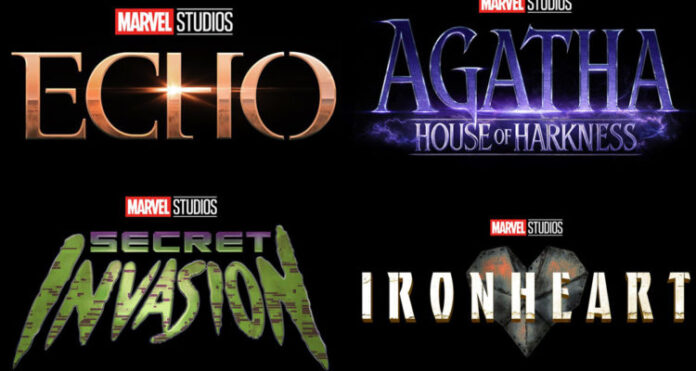 The cool thing about Marvel is they don’t play games with their fans. They know that we are already aware of many of the projects coming up in Phase Four in 2022 and beyond. So why screw around? Just announce ’em already and make ’em official.

Marvel has confirmed and given actual logos to Hawkeye spinoff Echo, and WandaVision spinoff Agatha: House of Harkness, two shows we knew were coming. Meanwhile, they’ve also teased production on other shows including Armor Wars, Ironheart, and Secret Invasion.

Echo stars Alaqua Cox as Maya Lopez, adoptive daughter of the villainous Kingpin and a deaf woman with the ability to perfectly mimick other people’s movements. She was first to serve as the vigilante Ronin, although it’s unclear how her backstory will be weaved into the MCU.

Agatha: House of Harkness is a series we only learned about recently. It’ll return Kathryn Hahn to her fan-favorite role as witch Agatha Harkness, who when we last saw her was trapped in the sitcom town of Westview. WandaVision showrunner Jac Schaefer returns as executive producer and head writer.

Ironheart stars Dominique Thorne as Riri Williams, a genius-level inventor who uses her smart to reverse engineer Tony Stark’s Iron Man armor to create her own.

Secret Invasion stars Samuel L. Jackson as Nick Fury and Ben Mendelsohn as Talos, who team up to investigate Skrulls who have been hiding in plain sight for years, infiltrating the government and other positions of power.

Armor Wars stars Don Cheadle, who returns as Jim “Rhodey’ Rhodes, who must confront one of his pal Tony Stark’s greatest fears when his dangerous tech falls into the wrong hands. Yassir Lester, who worked with Cheadle on Black Monday, is the head writer.