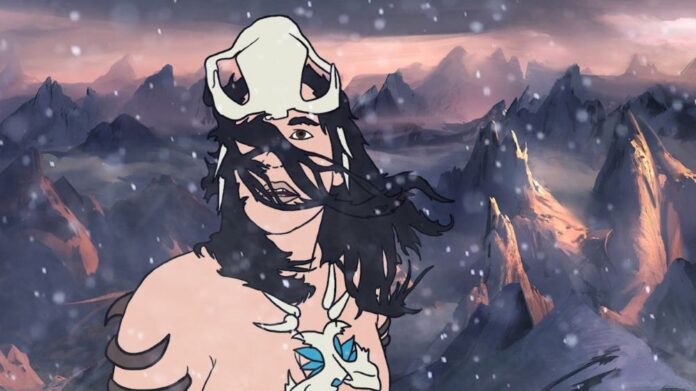 *NOTE: This review was previously part of our 2021 SXSW Film Festival Coverage. The Spine of Night opens in theaters and digital on October 29th.*

Well, I didn’t go to SXSW expecting to see the most grisly animated film I’ve ever witnessed, but that’s what The Spine of Night delivered. Perhaps the title should’ve been a warning? Philip Gelatt and Morgan Galen King’s grim epic fantasy comprises multiple tales of brutality, magic, tyranny, and heroic sacrifice set across what appears to be multiple centuries across time. The hyper-realistic, rotoscoping animation of Ralph Bakshi would seem a clear influence, but the film stands on its own as an astonishingly unforgiving tale of power run amok.

The Spine of Night is, first and foremost, about storytelling. Everybody has one, and they all center on “the Bloom”, a magical blue flower with extraordinary powers. The first we hear is from the naked swamp mage Tzod (Lucy Lawless) as she approaches a skull-shaped cave and its ancient Guardian (Richard E. Grant) in search of the flower’s gifts. Rather than fight, as he’s warily done for years, they exchange stories. Hers involves a petty prince (Patton Oswalt) who massacres her tribe with the help of a mercenary (Joe Manganiello), all to steal the power of the Bloom from her. It’s then that her path crosses with Ghal-sur (Jordan Douglas Smith), a seemingly innocent scholar whose intentions are malevolent to be sure, and spell doom for the entire world.

Each story told by Tzod and the Guardian presents a different phase of the Bloom, from it falling into Ghal-Sur’s hands, to his abuse of its power and the horrors he unleashes on the people, to the small band of fighters who attempt to stop him. Each is more horrific and cruel than the last. Even the minor diversions into smaller, seemingly-hopeful tales, such as one with the last two survivors of a Ghal-Sur massacre, end in slaughter. It can be a bit much to take consuming this much rampant bloodshed, and the filmmakers take it to the extreme. You’ll see countless decapitations, mutilations, immolations, and yes, there’s worse.

And yet, the Fire and Ice-inspired animation is never less than sheer artistry and wonderfully detailed in its depictions of sorcery and violence. Free from the restrictions of live-action filmmaking, Gelatt and King go wild with eye-popping displays, and allow their A-list cast of voice actors to express with gusto.  If there’s an over-arching theme of these stories it’s that the cycle of violence is never-ending, and wielded by both the good and the bad. These cycles create the legends, fables, and myths that civilizations are built upon. Ultimately, The Spine of Night is set apart by how its visual beauty works in symphony with the gruesome imagery on display.  This one is sure to be a winner with fans of this art style and the rare adult-themed fantasy epic.