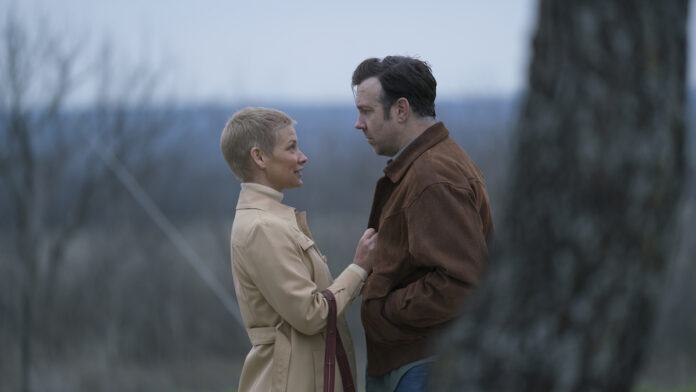 Often the follow-up film from a celebrated actor and their signature project is a gage of where the performer is going. In South of Heaven, Jason Sudiekis keeps his Ted Lasso accent and not much else. Co-writer and director Aharon Keshales’ story follows, Jimmy Ray a man released from prison to his dying “lady love,” Annie. Things literally go south from there.

Once Sudeikis is released into the arms of Ant Man’s Evangeline Lilly, the couple’s happy reunion is cut short after his parole officer (Shea Whigham) forces him back into a life of crime for one last gig. On his way back from a drop, Jimmy accidentally kills another driver, also on his way back from a different drop. Mafia Man Price (Mike Colter, Luke Cage) is quickly on his tail, diminishing Jimmy’s chances of living a clean safe life.

South of Heaven’s first twenty minutes is solid. Sudeikis delivers a poignant speech about getting out of prison to the parole board before getting out and making a life with Lilly. For that duration you think you are getting a romantic redemption film about two people refinding each other after years apart.

Once Whigham appears, the tone quickly shifts into a crime film then poorly executed black comedy then back again over and over. Plot points whizz by and turns happen for no reason. The final twist could have been omitted altogether, shaving 20 minutes off the screen time.

Sudeikis tries his best to play a good man pushed too far. He definitely has the heart of gold part down. However, the Saturday Night Live alum feels lost in this role. Keshales, Kai Marks, and Navot Papushado script does not do him any favors. As the tone constantly changes, it’s no wonder Sudeikis can’t find solid footing to stand on.

The biggest disappointment of this film is the wasted cast. Lilly’s part feels one-dimensional. Shea Whigham is acting for a whole other movie, probably a Coen Brothers one. Acclaimed character actor Jeremy Bob is completely underused as the underwritten Honest Frank. The one consistent bright light is Colter’s Price, who is charming, hilarious, and most importantly of all believable.

With Ted Lasso’s second season coming to a close today, it makes sense that fans of the show will want to get all of Sudeikis they can until the third (and final season) comes out in a year. However South of Heaven is not the way to get it.

You can catch South of Heaven in theaters and on-demand. Watch the trailer below.