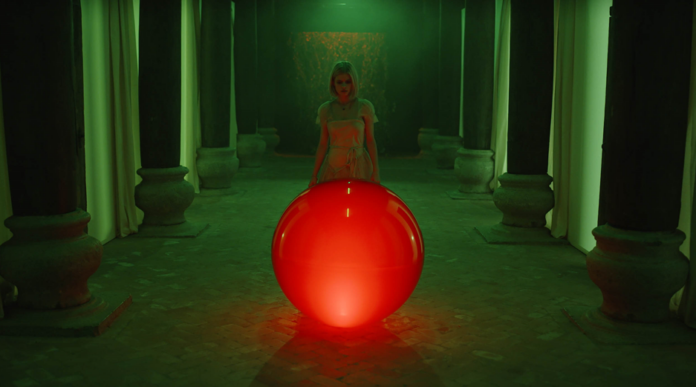 Pivotal moments change the direction of one’s life. No one knows that better than Margaret Winter (Carlson Young) in The Blazing World. Margret’s twin sister, Elizabeth (Lillie Fink) tragically drowned when they were young. The story takes an even more devastating turn with Margaret (Josie Fink) being the one to find her body. Lizzie’s passing shatters what was left of a family that was already on the rocks. Now, a dozen or so years later, Margret is still trying to make sense of everything that happened on that fateful day. 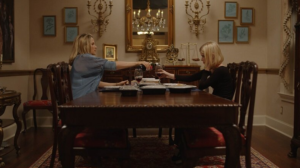 Margaret’s parents inconceivably still live in the house where the accident occurred. After all this time, they have decided to finally move.  Margaret’s mother Alice (Vinessa Shaw) is a shell of who she was – mumbling to herself, unchecked emotions, and addicted to Ambien.  Meanwhile her husband Tom (Dermot Mulroney) drinks away his pain. Margaret herself has her fair share of problems. Most notably, she has been fixated on a vision she had from that day. She swears she saw a man take Lizzie and jump into a portal. She feels deep down Lizzie is alive and will do whatever she must to bring her back. When that man comes to her and reaffirms what she saw, she knows she isn’t crazy. He introduces himself as Lained (Udo Kier) and gives Margaret a unique opportunity to save her sister, but at what cost? 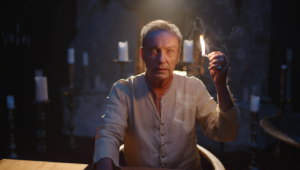 The Blazing World is directed by Carlson Young who also wrote the film alongside Pierce Brown. Writing, directing, and staring in a film is no easy feat. Especially when the film is Young’s feature length writing and directing debut. Overall Young does an admirable job. The Blazing World was first conceived as a short, barely over 10 minutes with Young also taking on all three roles. Her directorial decisions are on point, but there are moments when the script leaves something to be desired. The acting throughout is woefully uneven. There are some truly memorable and enjoyable performances, while others fall short – almost ruining the atmosphere Young created. 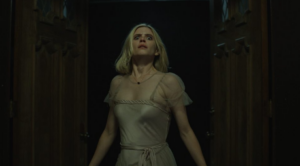 However, it is the visuals in The Blazing World that will be what stick in your mind. Margaret’s journey in The Blazing World is reminiscent of a nightmarish version of Alice in Wonderland. To fully enjoy the film, one must suspend all disbelief. From the jump a degree of fantasy is present and this only compounds as the film progresses. Every “world” Margaret visits is unique and chilling. The score throughout is fantastic and perfectly sets the tone for each scene. Young is able to strike the perfect balance between a fantasy adventure and a suspense thriller. Just as the fantasy begins taking ahold, a scare is quick to follow. The Blazing World’s visuals, pacing, and music blend perfectly to make it worth a watch. Not to mention that there is enough there for some interesting discussions and personal interpretations to follow.

The Blazing World is available now in theaters and VOD. You can also check out our interview with Carlson Young here!