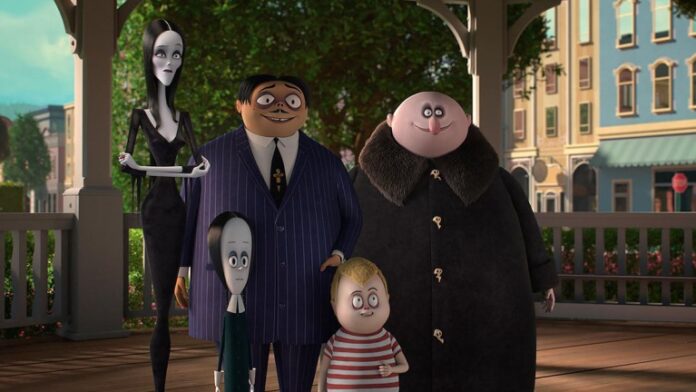 The creepy and kooky creations of Charles Addams may have found themselves a new torture device: subject victims to The Addams Family 2. Fans of the oddly macabre clan, led by Gomez and Morticia Addams (voiced by Oscar Isaac and Charlize Theron) will wonder who approved this monstrously unfunny sequel that miscalculates on everything that has made the Addams’ popular. They are and have always been counterculture icons, who always stayed true to one another when the outside world rejected their ghoulish ways. Instead, Wednesday Addams might not be an actual Addams. Say what? And the Addams’ are now too generic to be counterculture anything.

The Addams Family 2 finds the morose Wednesday (Chloe Grace Moretz) using her apparent scientific brilliance to create a Frankenstein-like device that transfers the traits of one into another, like poor Uncle Fester (Nick Kroll) who is given some of the smarts of her pet octopus.  Not that this matters at a school science fair where everybody wins in order to not hurt any kid’s feelings. It does get the attention of Cyrus Strange (Bill Hader), who wants the invention for himself. While Wednesday turns down his offer of employment, he isn’t going to give up so easily.

While it makes sense for your typical teen girl to pull away from her parents, it never quite clicks when Wednesday begins to do it to her parents, particularly Gomez. Distraught over his daughter’s lack of affection for the family, he gathers the troops for a forced road trip, in their own spooky version of a Family Truckster, to hit some of America’s most cherished landmarks…like Death Valley, the Salem Witch Trials, and of course, Sleepy Hollow. But they are in constant pursuit by a sniveling lawyer (Wallace Shawn) with his own Lurch-like companion, who claims to have proof Wednesday was switched at birth. As if she wasn’t feeling like an outsider already!

Nothing about this plot makes sense in the world of the Addams Family. An army of screenwriters apparently couldn’t figure out the family dynamic, with Wednesday showing outright animosity towards pretty much everyone. While she might have been gloomy and a loner by nature, she is like all of the Addams’ which is accepting and encouraging of their weirdness, just as they are to her. But in this film, just as in its predecessor, the story revolves around Wednesday’s attempts to fit in which is so unlike her as to be distracting. Furthermore, when she inevitably reverts back to form, it’s as unconvincing as her original turn.

The move to animation has only encouraged this tendency to go too far with how the Addams’ treat one another. In one scene, Wednesday uses a voodoo doll to bounce Pugsley (Javon Walton, replacing Finn Wolfhard) all around Niagra Falls in an effort to kill him, one of the numerous attempts to end her sibling’s life.  None of Wednesday’s murderous stunts are particularly humorous, as very little of The Addams Family 2 is overall, and again, it doesn’t get the Wednesday/Pugsley sibling rivalry at all.

When Snoop Dogg arrives to voice Cousin It, and he turns out to be a hip-hop star that everybody wants to clamor around, you know The Addams’ have once again embraced the mainstream, as they did with the classic live-action movies of the ’90s. I mean, MC Hammer did an entire hit single and video for them! But I would argue those films at least understood The Addams Family is best the more subversive it gets. There’s nothing remotely edgy this time around, but it’s also not specially geared towards kids, either. It’s truly hard to figure out who The Addams Family 2 is for other than diehards, and even they might wish this sequel had been kept under the crawlspace.

The Addams Family 2 is available now in theaters and VOD.