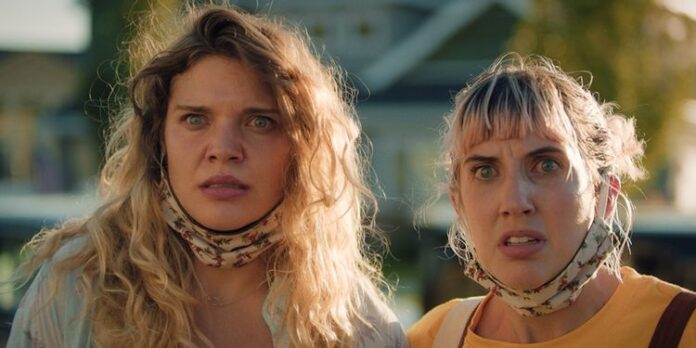 Can we make fun of the pandemic yet? Can we find the comedy in an illness that killed millions of people all over the world? Permission is fully given in the new road-trip comedy Stop and Go.

Known for their work on the Bringham Young Sketch comedy series Studio C, real-life childhood friends Mallory Everton and Whitney Call play close sisters and roommates, Blake and Jamie. Both are women in their early 30s, who sort of have their ish together but are struggling in one particular area.

When the pandemic hits, both women realize their elderly grandmother is safer with them than in her nursing home. The two decide to drive across the country 20 hours during the pandemic – what could go wrong?

Written by Call and Everton (who have been friends since they were 9 years old), Stop and Go’s script is rooted in the relationship between the two sisters. From online dating faux pas to singing in the car to finding a pet sitter, the film is overflowing with oodles of charm.

Because this is a road trip movie, the duo gets into shenanigans along the way. Some of their adventures, like an odd dog breeding scenario, would feel over the top if executed differently by co-directors Everton and Stephen Meek. Because the creative team bookends those scenes with real moments, the absurdity falls away.

The film’s third act does have some issues. There’s a twist in the final 15 minutes that is then reversed in the final 5. The whole maneuver takes away from the film’s ending.

While many films focusing on the pandemic either felt too close to home or tried too hard, a lot can be said for the 2021 SXSW contender. What works about Stop and Go is that the film doesn’t try to be relatable on purpose. Instead, Call and Everton smartly try to find every comedic moment and squeeze as much humor and reality as they can out of it. The relatability comes from the sisters’ relationship. There’s no big lesson learned or major life-changing character arcs. All in all Stop and Go is a slice of life film that works.

Most road movies now focus on two warring parties, often fighting over the future or shared trauma. Stop and Go is a rare breed, focusing instead on two allies that know together they can get through anything. That might be the best lesson one can take away from the pandemic.

You can watch Stop and Go in theaters and on-demand. Watch the trailer below

‘Stop And Go’ Trailer: Road Trip Comedy Set During The Pandemic Looks Like A Blast