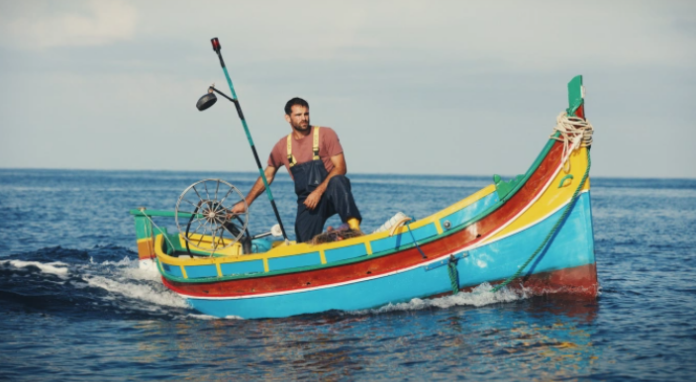 Luzzu is a heartfelt film more comparable to a documentary; a Docudrama. Jesmark (Jesmark Scicluna) is a hardworking Maltese fisherman faced with an agonizing choice when it comes to career and family. He comes from a familial culture passed down by generations of Maltese residents who handcraft boats and fish off the local shores. These handcrafted boats are called Luzzu’s. A Luzzu is a traditional, multicolored wooden fishing boat often painted three bright colors of Blues, Yellows, and Reds.  Jesmark has been handed down his leaky Luzzu from his father and grandfather which is in need of desperate repair. He hopes to live as they did and make a meager living at sea for his wife and newborn son. However, there’s a mounting economic strain affecting Malta and its fishing industry all while Jesmark scrambles to acquire money to take care of his wife Denise (Michela Farrugia) and slow developing newborn son, Aiden.

Maltese-American writer-director-editor Alex Camilleri shines a cinematic spotlight on an island nation rarely seen for it’s local traditions and economic impact. Camilleri takes a close, tough view of Maltese fisherman increasingly driven from the trade they respect and love. He drives the realism even further by using non professional actors in a gamble that highly pays off. Luzzu won a Sundance Jury Prize for its nonprofessional lead actor Jesmark Scicluna, a real-life Maltese fisherman, and heralds the arrival of Alex Camilleri. His touching film operates in a neo-realist tradition, also featuring the work of Camilleri’s mentor and producer of this film, Ramin Bahrani (Man Push Cart, The White Tiger).

Jesmark Scicluna is a stand out lead who’s real life dilemma parallels that of the striking character he so wonderfully plays. There’s a clear reflection of his own life embedded within the young father and struggling fisherman he portrays. Jesmark is a quiet yet dominant persona who sets the tone of the film around him. Between Brexit and climate disruption, the EU (European Union) has dove deep into severe industry regulations that have caused a depressing impact on small trade and local, often generational fishing families. Jesmark has a hostile new boss (Stephen Buhagiar) who’s selling his fish short at the market, his son requires more costly care, and the relationship between him and his wife Denise are reaching a breaking point. Jesmark is forced to decide whether he will hold on to a collapsing industry or move on from a long celebrated livelihood that no longer holds sustainable value.

Luzzu is an honest film that features real life scenarios and people who convey a heartbreaking message of the Maltese world/livelihood that these families have known and thrived on for decades. It is painstakingly crumbling before their very eyes. Fisherman families are caught between a ‘rock and hard place’ circumstance that is largely manipulated and controlled by the EU. The film exposes a sinister black market operation all too familiar with documentary films focused on oceanic life/industries. This time, the viewpoint is how it directly impacts the Mediterranean fish population and the local families who depend on it. Camilleri and Bahrani include vivid imagery with a minimally spoken dialogue more readable through body language with simple yet effective direction. Their beautiful and artistic approach can come across and slow and wanting to know more about the characters who Jesmark knows and meets throughout the film. Truly a must see film that pulls at your heartstrings and opens your eyes to the smaller regions of the world who are greatly impacted by shitty and uncaring conglomerates who dictate and control livelihoods in more frequent and devastating ways. Highly recommend.