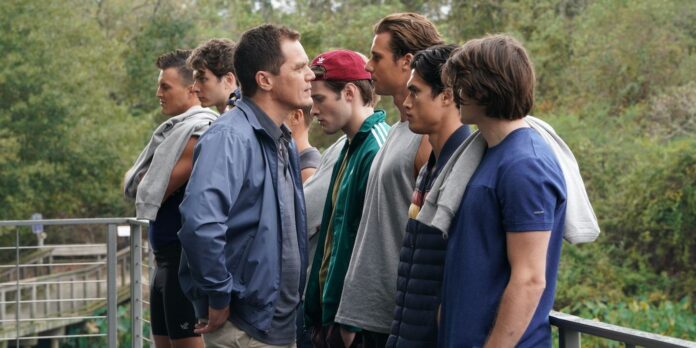 It’s safe to say Michael Shannon was one of the best parts of Hulu’s Nine Perfect Strangers, which ended this fall. In his supporting roles in projects like Knives Out, The Little Drummer Girl, and What They Had, the actor is known for giving strong and stand out performances. In his latest film Heart of Champions, Shannon plays a college rowing coach who returns to his alma mater to lead a dysfunctional team. Ironically the film is just as flawed.

The team itself is suffering under an unseen coach and a tyrant captain (Alexander Ledwig) who is being pressured to make the Olympic trials by his father. There’s the slightly laxidazical John (Alex MacNicoll) and the recently orphaned and very sad Chris (Charles Melton). Heart of Champions plays out like a typical “inspirational” sports movie would with the team not getting along until the touch but fair Coach Murphy (Shannon) comes in to set them straight. The approach is predicatable and too overly serious.

The film’s issues does not lie with Shannon, other than taking a project beneath his caliber. He is easily the most fascinating thing on screen during its 2 hour run time. However, filmmaker Michael Mailer and writer Voijin Gjaja give him very little to work with. We know very little about Coach Murphy’s back story other than being a Veitnam Vet who is an alum of the college and who knew a few of his athlete’s parents. All of that information is delivered through dialogue and very little time is focused on Coach Murphy building relationships with his team.We just kind of hear about it.

Instead of Shannon, Heart of Champions focuses on the rowing team and their personal lives at college. Melton, who is best known for playing Reggie Mantle on Riverdale, brings the same nonsensical melodrama from the teen soap to this film. His backstory is full of unrealistic coincidences that create a false sense of empathy.

The heavy focus on the rowing team hurts the film. Their personal lives almost overshadow anything else on screen. Their problems are “so serious” that no one can really smile or create a bond. Any jokes that are made are contradicted by overdramatic lighting and trite dialogue.

In the film’s final act, writer Gjaja gives us a narrative twist that truely makes no sense. Coming out of nowhere, the choice doesn’t have any emotional legs to stand on and ruins any sense of realism the film had left.

Overall, Shannon’s performance is at least reserved and interesting, trying to balance out the film. He doesn’t reinvent the wheel when it comes to the college coach archetype but he does enough with his role that its interesting to watch. It’s a testament to a great actor who can steady a bonkers ship. Well, he tries to any way.

Heart of Champions is playing in select theaters. Watch the trailer below.