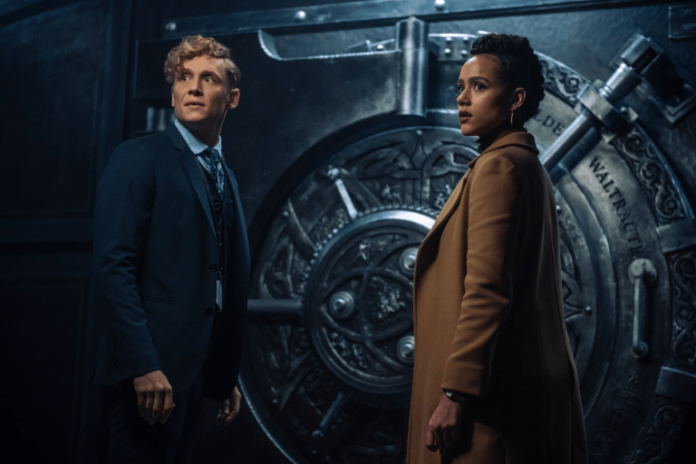 The year of Zack Snyder continues. Forget whatever he’s done with the DCEU, he’s already accomplished as much if not more with Netflix’s Army of the Dead, and its entertaining prequel, Army of Thieves. The latter establishes that the ‘Dead’ franchise won’t just be about zombie action flicks, but that there’s a willingness to try out different genres set in a well-established universe. In this case, fans of Matthias Schweighofer’s erstwhile safe cracker Ludwig Dieter will get an origin story and nifty, fun heist flick that expands not only what we know of Dieter, but of the undead-infested world at large.

Schoweighofer not only returns as the chatty, overconfident Dieter; he takes the camera, as well, building off a resume of films in his native Germany. The story finds Dieter working a dull bank job by day, while by night he makes Youtube videos nobody watches about his awesome safe cracking skills. When one finally does get a view, it’s by the mysterious Gwendoline (F9 and Game of Thrones actress Nathalie Emmanuel) who ropes him into a plot to crack four legendarily difficult safes of designer Hans Wagner. If that name sounds familiar, it’s because Dieter glorifies Wagner before agreeing to join the dangerous zombie heist in Army of the Dead. The name Gwendoline should also mean something to eagle-eyed viewers of that film.

Right off the bat, one of the cool things about Army of Thieves is how much it informs and expands on the story we’ve already seen. Dieter, who is by no means a tough guy, he’s actually kind of a wimp, is nonetheless the best at what he does and knows it. That was one of his coolest traits, and none of that is different here. This is Dieter’s movie, and what it does is lay the groundwork for the man we know he will become, the sacrifices he will make, and so forth. Penned by Army of the Dead writer Shay Hatten, the film makes many allusions to the zombie outbreak and the quarantine situation in Las Vegas. While this works in drawing a line between the two established movies, it also goes overboard with flashes to scenes we know happen in the future, and one moment when Dieter has an ominous premonition about his fate. Army of Thieves and Army of the Dead are different enough it’s easy to see a viewer choosing one and not the other, and clearly Snyder and Hatten are trying to change that.

Like any good heist movie, the best part is in the planning. The actual safes aren’t that much of a challenge, but wrangling the personalities within Gwendoline’s Army of Thieves is where most of the conflict arises. Along for the ride are Ruby O. Fee as the sexy hacker and strategist Korina, Guz Khan plays getaway driver Rolf, and Stuart Martin is Gwendoline’s lover and team hot head Brad Cage. Being a tough guy and a toxic personality, he naturally dislikes Dieter and resents his closeness to Gwendoline. Double crosses, run-ins with incompetent INTERPOL agents, all of the heist movie boxes get checked in stylish fashion, with Schoweighofer showing that he fits right in with Snyder as a maximalist filmmaker. Netflix clearly spared no expense in making this movie happen, compared to Army of the Dead which sometimes looked like some corners had been cut. But this is what happens when you have one hit movie; the followups get a vote of confidence and that means better resources to play around with.

Other than Schoweighofer’s Dieter (not his real name, we discover), the other standout is Emmanuel who finally gets an action role to command after years of being a Fast & Furious bit player. She handles most of the physical action as the multi-talented Gwendoline. Not just the team’s brains, she’s a master criminal and a Hell of a fighter. She covers for Dieter when out in the field, but is just as good on her own. She’s a character that could easily become a major component of the ‘Dead’ universe, as hinted at by Snyder himself in recent interviews.

Your mileage on Army of Thieves might depend on how you feel about Dieter. It’s one thing to get him in measured doses, but an entire movie about him can be overwhelming. Ultimately, I think he’s better as a supporting character in a larger ensemble. That said, Army of Thieves is a propulsive, high-energy film that makes Dieter a more interesting,  unlikely hero. Even if he doesn’t return for the newly revealed Planet of the Dead (he almost certainly will), his story is far from over.