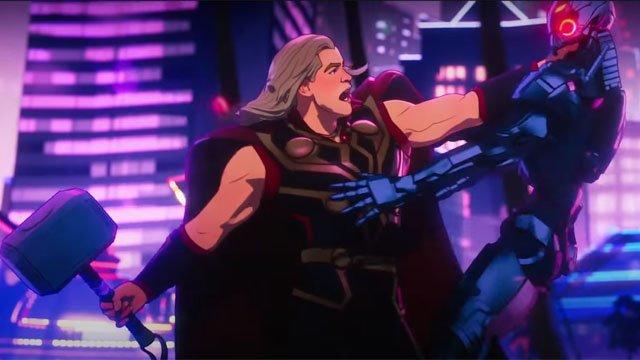 For most of the first season of Marvel series What If…?, each episode has been self-contained with the only thing carrying over the presence of Uatu the Watcher (voiced by Jeffrey Wright). But all of that changed with the arrival of Infinity Ultron, who has been revealed as the show’s big baddie. Tomorrow’s season finale will find Uatu, who has broken his oath, assembling a group of heroes from across the multiverse to defeat Ultron.

And one of those heroes will be Party Thor! Wait, what? You mean to tell me that Uatu has his pick of any hero from across multiple universes and he picks the wildly irresponsible one? I hope that gets explained somehow. In this clip we see Party Thor, still partying it up in Vegas, battling hordes of Ultron drones only to get a helping hand, literally, from Uatu.

This series has been hit and miss with me, but I’ve dug the last few Ultron-focused episodes and the reemergence of the “evil” Doctor Strange. I’m a firm believer there will be live-action ramifications to all of this, and we’ll see the beginning of it soon.

Party Thor gets dragged from Vegas to a multiversal showdown in this exclusive clip from the season finale of Marvel's What If…?@whatifofficial | @MarvelStudios | @chrishemsworth | @jfreewright pic.twitter.com/u5WogTOmbk