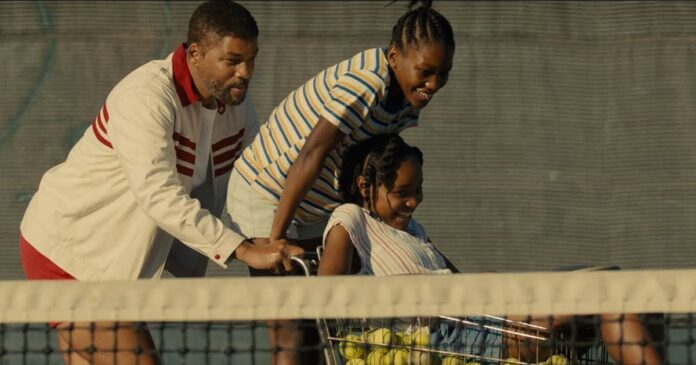 You know those overbearing parents who get angry and push their kids too hard at Little League games? While other parents may resent them, they have Richard Williams to look up to as an example of how intense pressure can create champions. It might also make you the subject of a movie. King Richard stars Will Smith as Richard Williams, father to future tennis legends Venus and Serena Williams.

The film has been earning rave reviews since debuting at Telluride. I saw it recently at Middleburg and also really enjoyed it, and can see it putting Smith back in the Best Actor race for the first time since Concussion. The role is tough, because Smith had to make us like someone who many still see as a major distraction who was out to make himself famous.  It could also be the breakout role for co-star Saniyya Sidney who plays Venus and carries a lot of emotional weight on her shoulders. Aunjanue Ellis, Demi Singleton, Tony Goldwyn, and Jon Bernthal co-star. Behind the camera is Reinaldo Marcus Green, who most recently directed Mark Wahlberg in Joe Bell.

This latest trailer features a new track from Beyonce, “Be Alive”, which features in a critical moment of the movie.

Armed with a clear vision and a brazen 78-page plan, Richard Williams is determined to write his daughters, Venus and Serena, into history. Training on Compton, California’s neglected tennis courts—rain or shine—the girls are shaped by their father’s unyielding commitment and their mother’s balanced perspective and keen intuition, defying the seemingly insurmountable odds and prevailing expectations laid before them. Based on the true story that will inspire the world, “King Richard” follows the uplifting journey of a family whose unwavering resolve and unconditional belief ultimately delivers two of the world’s greatest sports legends.