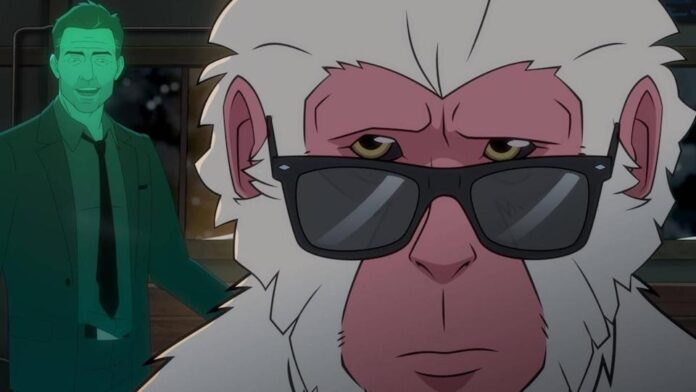 Of all the weirdo characters in the Marvel Universe, Hit-Monkey might be the weirdest. The name explains it all: he’s literally a monkey who doubles as an assassin. You probably already guessed that such a character fits neatly in the Deadpool-verse, where the character first had his first major story arc. And now he’s got his own Hulu animated series, at least for a season, which is something Deadpool can’t say.

Hit-Monkey features the voices of George Takei, Jason Sudeikis, Olivia Munn, Ally Maki, Nobi Nakanishi, and Fred Tatasciore. Sudeikis voices Bryce, the ghost of a dead hit-man who had been nursed back to health by a clan of snow monkeys. Now he’s tethered to the snow-monkey who uses the assassin’s skills to get revenge. It’s all as silly as it sounds, which makes it perfect for showrunners Josh Gordon and Will Speck, whose brand of humor includes Office Christmas Party and Blades of Glory.

Hulu will debut Hit-Monkey on November 12th, and will likely stick around for only one season. As it’s a non-MCU series it falls in the same Marvel Television umbrella as Helstrom, MODOK, Agents of SHIELD, and others.

​​After a Japanese snow monkey’s tribe is slaughtered, he joins forces with the ghost of an American assassin and together, they begin killing their way through the Yakuza underworld.

‘Hit-Monkey’ Gets A Second Season On Hulu, But No Longer Has Marvel Branding