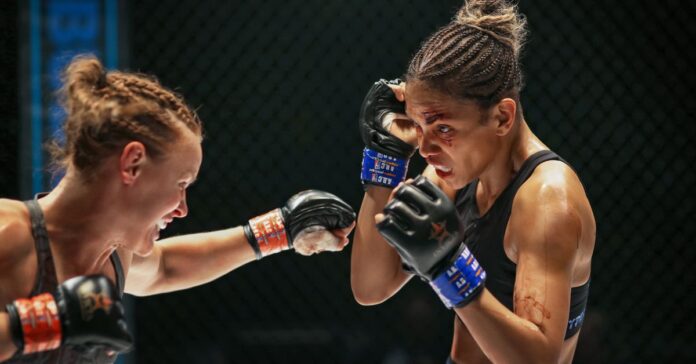 With so much clamor around James Bond and wanting for a woman to perhaps take the role, there’s been more buzz about Halle Berry revisiting her Jinx character from Die Another Day. That’s probably not going to happen, and she might be busy in the latest phase of her career as a filmmaker. Berry’s directorial debut, the MMA drama Bruised, hits Netflix next month and now there’s a new trailer.

Berry, looking like a woman who has taken her share of life’s punches, plays a disgraced MMA fighter who returns to the octagon at the same time she’s dealing with the return of her estranged son. It’s a story of redemption and defeating personal demons, and Berry looks like she is going to be great in this.

Jackie Justice (Halle Berry) is a mixed martial arts fighter who leaves the sport in disgrace. Down on her luck and simmering with rage and regret years after the fight, she’s coaxed into a brutal underground fight by her manager and boyfriend Desi (Adan Canto) and grabs the attention of a fight league promoter (Shamier Anderson) who promises Jackie a life back in the octagon. But the road to redemption becomes unexpectedly personal when Manny (Danny Boyd, Jr.) — the son she gave up as an infant — shows up at her doorstep. BRUISED marks the directorial debut of Academy Award winner Halle Berry and also stars Adriane Lenox, Sheila Atim, Valentina Schevchenko, and Stephen McKinley Henderson in a triumphant story of a fighter who reclaims her power, in and out of the ring, when everyone has counted her out.