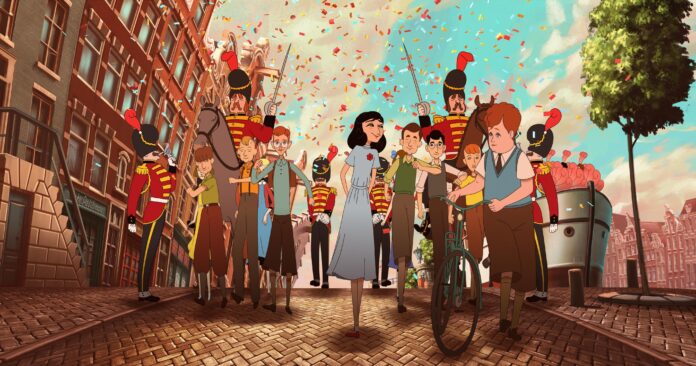 If you know the name Ari Folman at all, it’s probably for his stunning animated anti-war film Waltz with Bashir, a biopic of sorts that used the filmmakers memories of the Lebanon War to explore its impact. His followup, the brilliant high-concept The Congress explored a future in which identity is just another thing to be marketed, sold, and copied. His latest, Where is Anne Frank, is a little bit like an amalgamation of the two, but clearly designed to education children about the famous teenage diarist. While successful stylistically with Folman’s trademark comic book-style visuals, some of the heavy-handed messaging to connect Frank’s story with the present dulls the urgency Folman is aiming for.

Magic and fantasy swirl around this version of Anne Frank’s story, which actually doesn’t center on her as it does her imaginary friend Kitty (Ruby Stokes), who Anne wrote to in the pages of her diary. Through supernatural circumstances, Kitty colorfully springs forth from the pages of the book and inside the Anne Frank House. Stepping into the outside world, where she becomes a real girl, Kitty finds Anne’s name everywhere but has no idea what happened to her friend. In the present, we see Kitty pursued at every turn by police who blame her for stealing the diary. She also sets out to learn everything she can about what happened to Anne; exploring the many buildings named after her, and by reading the many books about Anne, including her famous dairy.  Along the way, she also falls for Peter, a young refugee activist and the only one who knows her secret.

Jumping across timelines, Where is Anne Frank uses Kitty as an easy guide to explore Anne Frank the teenage girl, not the hero she would be perceived as later in life. Kitty knows all of Anne’s secrets and school-age desires; her fascination with Clark Gable, her vain attitude towards the many boys who sought her affection, her squabbles with her mother and sister Margot. A vibrant color palette adds a surreal quality to Anne’s life pre-occupation, while a grim fog clouds what would come after, with the Nazis presented as a ghoulish zombie army.

It’s clear that Folman is close to the material and the subject matter. He dedicated the film to his parents, who arrived at Auschwitz around the same time as the Frank’s. But using Kitty as the centerpiece for Where is Anne Frank was the problem as she’s such a blank slate. Conceived by Anne with daring red hair and a sparkle of her bright personality, she’s also notably Caucasian and not Jewish. The reason is obvious although kids, who are clearly the target audience, will probably miss it. Anne imagines Kitty as white so that she can be free from the hatred she faces. In the present, Kitty takes on the cause of brown-skinned refugees in Europe, with Folman drawing parallels to the persecution of Jews during WWII. It just comes across as clumsy in execution, made worse by the romantic relationship between Kitty and Peter which feels forced. A messy final act involving the police, an act of revolution Anne Frank would be proud of, and a swooning goodbye between lovebirds ends things on a confusing note. While obviously well-intentioned, Where is Anne Frank has way too much going on to make a clear, meaningful statement about the young writer’s importance to our world today. It may, however, inspire kids to do further research on her and if that’s the case then Folman has done the world a service.