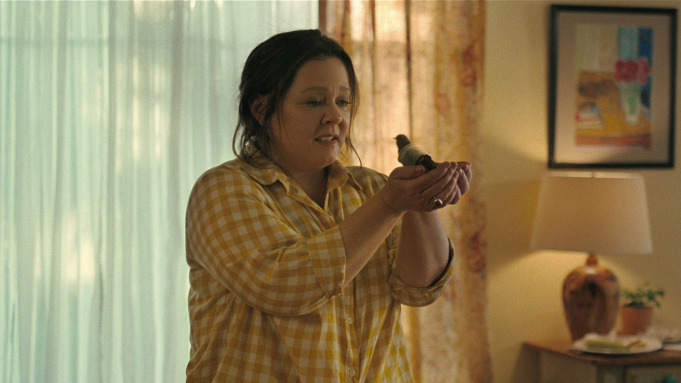 “Birds are tricky,”  says Jack Maynard (Chris O’Dowd) to his pregnant wife Lilly (Melissa McCarthy) early on in Theodore Melfi’s The Starling. He’s not referring to actual birds, but the painting of them on the wall of their unborn daughter Katie’s room. Of course, this line will come to have greater, more profound meaning throughout this quirky, cloying melodrama about an angry bird that changes the lives of the humans it encounters. If that statement causes a spontaneous eyeroll then you and I are on the same wavelength. While McCarthy and O’Dowd give powerful performances as a couple drowning in grief, they are waylaid at every turn by a predictable, sappy screenplay that undermines everything.

Heavy on the emotional manipulation, The Starling begins with the happy couple as they prepare for the birth of their child. Jump forward a year later and we are thumped over the head with how drastically things have changed. Lilly is practically catatonic with despair, affecting her floor manager job at a local grocery store; Jack is in a psychiatric hospital doing therapy art with Daveed Diggs. Their daughter Katie, who they had been so happily planning for, died suddenly. That’s a tough thing to bounce back from. Good thing there’s a bird with serious boundary issues. And a quirky veterinarian who happens to be a pretty good therapist for people, too. His name also happens to be Larry Fine, providing McCarthy an easy Three Stooges gag. Jokes are rare in The Starling, so take what you can get.

The territorial starling arrives to harass Lilly as she’s trying to empty out her life, getting rid of things that remind her of the pain and loss she’s experienced, and planting a garden in her yard. Heavy metaphor, much? She takes to trying all sorts of things to get rid of the annoying bird, many of them violent and at least one lethal. She takes to wearing a goofy football helmet to thwart the dive-bombing fiend. This stuff is cute, and McCarthy is good at the brief moments of physical humor they afford her. But none of it really connects you to her pain. Fluffy conversations with her small circle of clueless friends (Timothy Olyphant plays her prickly boss, Skyler Gisondo a moronic grocery clerk, Laura Harrier wasted as a cashier) feel like screenwriter Matt Harris was shrugging his way to the meatier stuff. Perhaps if Melfi had written this himself it would be different, as he’s proven capable of balancing heavy themes with a lighter touch.

And to be fair, there is definitely some hard-hitting material here, and The Starling works best when it ditches the greeting card philosophy and really digs into Lilly and Jack’s struggles. McCarthy and O’Dowd, who have worked together previously in Bridesmaids and Melfi’s comedy St. Vincent, are phenomenal comedic actors who have transitioned well into serious drama. Despite the cheesy shit surrounding them, including a feel-good soundtrack of zen pop hits, their characters are really going through something no parent should ever have to. Both actors saying more with a glance than most can with an entire sheet of dialog. McCarthy stooping to her knees to scrub away the carpet indents from her daughter’s removed crib; O’Dowd barely able to utter his daughter’s name without breaking down…these are things that hit you right in the gut.

Movies like The Starling are all but removed from theaters now, and while that’s a shame they’ve found a home on streaming. On Netflix, which is where this is headed later in September, is the perfect place for this brand of overly sentimental mush. It’s watchable, and will charm the feathers off of some, but only because McCarthy and O’Dowd’s talent flies so high.