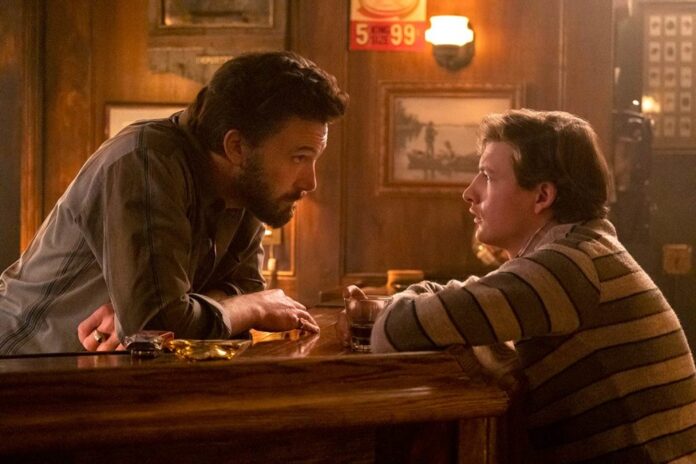 The last time Ben Affleck and George Clooney had a chance to collaborate, the result was 2012’s Best Picture winner, Argo. Not only was it critically acclaimed, but also a big box office hit. Times have definitely changed in the last decade. Mature dramas like that just don’t get the same big-screen treatment anymore, and that’s the kind of movie Affleck and Clooney have in The Tender Bar, which hit Amazon Prime Video this Christmas.

Directed by Clooney and starring Affleck along with Tye Sheridan, Lily Rabe, Christopher Lloyd, the film centers on a young boy who seeks a replacement for his father inside of a local pub where his uncle hangs out. The film was adapted by The Departed writer William Monahan, based on the Pulitzer Prize winning book by J. R. Moehringer.

Amazon will release The Tender Bar into NY and LA theaters on December 17th, with a wider rollout on December 22nd. It will then go to Amazon Prime Video beginning January 7th 2022.

The Tender Bar tells the story of J.R. (Sheridan), a fatherless boy growing up in the glow of a bar where the bartender, his Uncle Charlie (Affleck), is the sharpest and most colorful of an assortment of quirky and demonstrative father figures. As the boy’s determined mother (Rabe) struggles to provide her son with opportunities denied to her — and leave the dilapidated home of her outrageous if begrudgingly supportive father (Christopher Lloyd) — J.R. begins to gamely, if not always gracefully, pursue his romantic and professional dreams — with one foot persistently placed in Uncle Charlie’s bar. The Tender Bar is based on the best-selling memoir of the same name by J.R. Moehringer.