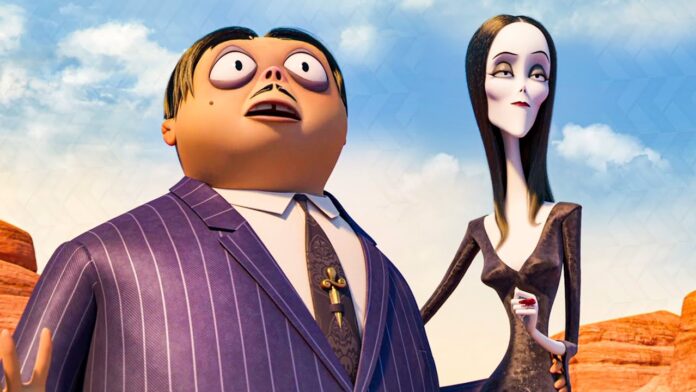 People just love The Addams Family. No matter when the creepy and kooky clan of misfits arrive, whether it’s in the classic TV series, or the live-action movies, or the animated film from two years ago which made over $200M, audiences can’t get enough. And so it was a no-brainer we’d get a sequel that finds them doing, what else, going on vacation to do weird things at our national landmarks.

The starry voice cast for The Addams Family 2 remains largely intact, with Charlize Theron and Oscar Isaac as Morticia and Gomez Addams, with Chloe Grace Moretz back as Wednesday, who is as morbid as we want her to be by all appearances. Bette Midler is back as Grandmama Addams, with Nick Kroll as Uncle Fester.  However, Finn Wolfhard no longer voices the rambunctious Puglsey, replaced by Euphoria actor Javon Walton. Bill Hader joins the cast as new character, Cyrus, while Snoop Dogg plays Cousin Itt. Returning co-director Conrad Vernon gets in on the fun as Lurch.

MGM has bounced The Addams Family 2 up and down the schedule due to COVID, but now the film is scheduled to open in theaters and VOD on October 1st.

In this all new movie we find Morticia and Gomez distraught that their children are growing up, skipping family dinners, and totally consumed with ‘scream time.’ To reclaim their bond they decide to cram Wednesday, Pugsley, Uncle Fester and the crew into their haunted camper and hit the road for one last miserable family vacation. Their adventure across America takes them out of their element and into hilarious run-ins with their iconic cousin, IT, as well as many new kooky characters. What could possibly go wrong?