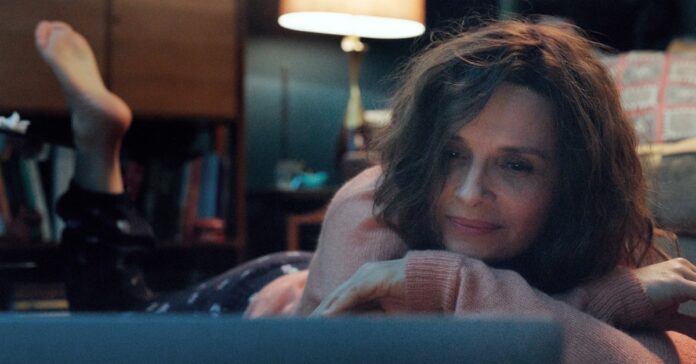 Who You Think I Am is a cinematic blend of catfishing, the predictably common mid-life crisis scenario, and a sexual thriller that bends reality to dizzying effect. A French film adapted from Camille Laurens’ best-selling novel and co-scripted by Julie Peyr; a regular collaborator of Arnaud Desplechin. Claire (Juliette Binoche) is a middle-aged professor and single mom who’s sexually involved with a younger man, Ludo (Guillaume Gouix) who only wants to keep things casual. Her need for more with her young lover pushes him to eventually ghost Claire. In retaliation, she creates a fake Facebook profile to snoop around Ludo’s friend list. She soon has her sights set on Ludo’s handsome photographer roommate, Alex (François Civil) and requests his friendship.

Juliette Binoche balances cunning and vulnerability in this romantic cyber-drama turned psychological thriller from writer-director Safy Nebbou. Binoche teeters Claire gracefully on the scale of a scorned older woman and the gorgeous 24-year-old avatar “Clara”. She brilliantly blends the comfort-seeking attention while attempting to fulfill her wildest desires between both her personas. Unfortunately, Claire’s/Clara’s superficial correspondence with Alex (Civil) quickly escalates towards intense intimacy and an uncontrollably unhealthy obsession. Binoche beautifully captures the psychological depths of embodying Claire’s fantasy and reality. A world truly broken to a woman who no longer has the balance of the two. She is an absolute pleasure to watch from beginning to end.

Who You Think I Am is, admittedly, a unique take to a story involving cat-fishing and the realities of how damaging and unhealthy superficial/artificial relationships can be. I wasn’t sure what to expect but overall, the twisted story and the genuine conundrums presented are a mesmerizing pull that keeps you wanting to see more. Although this film is better than what I initially thought, it can be slow at times and will be depressing throughout the majority of it. It’s like watching an addict spiral out of control and there’s absolutely nothing you can do about it but watch them crash. Like I said, depressing. Ibrahim Maalouf adds exquisite competition to the film. His beautiful music accompanies a fairly decent plot with characters who make their acting in this film look too damn easy. A pleasure to the ears. Definitely worth a watch and listen.

Who You Think I Am opens in select theaters, September 3rd.