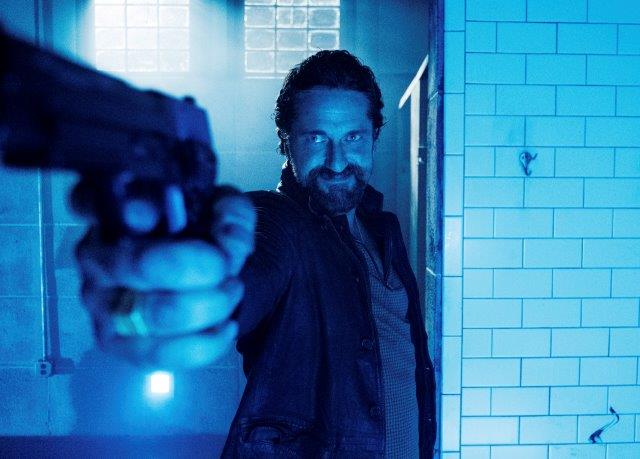 When it was announced that director Joe Carnahan was making a shoot ‘em up featuring Gerard Butler and Frank Grillo facing off against each other, it was pretty much a no-brainer what you can expect. Both actors have been players in his past films, and both are notoriously famous for their absolute badass tough-guy roles throughout their careers. However, with his latest film Copshop, Carnahan delivers on fun action, even if it’s a little uneven at times.

Nevada rookie cop Valerie (Alexis Louder) is on a ride with her no-nonsense boss when there is a call to break up a brawl at a nearby casino. As she tries to break up the melee, she gets sucker punched by Teddy (Frank Grillo). After making light use of him with her taser, they take Teddy back to the precinct. The funny thing is, Teddy doesn’t seem to mind going to jail for blatantly assaulting a cop. In fact, it seems like that was his plan all along. Now, why would someone want to get arrested too willingly? Well, it turns out someone is after Teddy for reasons that Copshop slowly reveals. Teddy gets put in a cell away from the drunk tank, but he’s not by himself for very long. Soon enough, a drunk man named Bob (Gerard Butler) side-swipes a few patrol officers on the highway and ends up in the drunk tank right across from Teddy’s cell.

Bob isn’t just some random drunk guy, he’s a hitman who’s been after Teddy, who has conned the local powers that be out of a significant amount of money. While Teddy thought the safest place he could be is in a police station, that couldn’t be further from the truth. In addition to Bob, there are others who are equally interested in shelling Teddy from his mortal coil. The reach of the local mob is pretty deep. In addition to politicians, other assassins, and even other police officers in the building all want a piece of the action.

With such a simple premise, Copshop screams subpar B-movie, but it gets elevated by the direction, Butler and Grillo chomping the scenery, and newcomer Alexis Louder stepping up to the plate as the rookie cop determined to get to the bottom of everything. It has a real Assault on Precinct 13 vibe to the movie as completely deranged hitman Tony (Toby Huss completely stealing the scene) comes in to try and steal the contract away from Bob and pretty much is a wise-cracking terminator who takes glee in mowing down a police station.

That said, Copshop does suffer from a c-change in the third act, when different people turn on each other and everyone becomes a weapons expert when they need to be. Towards the end, there’s a literal Chekhov’s gun that the audience can see coming a mile away. The plot of why Teddy did what he did, and the layers of corruption in the town could have further been expanded and enhanced Copshop even more.

But that doesn’t mean that this wasn’t a fun ride. Louder, who has been in steady climbing after appearing in Harriet, Watchmen, and The Tomorrow War gets a chance to continue to shine and show us that she’s ready for prime time. This is also a return to the Smoking Aces style of directing for Carnahan as the action is a big bucket of fun carnage that we all know and love. The ending of the film leaves room for a possible sequel that could have legs if Copshop is successful. The plot isn’t complex, because we really don’t need it to be, it’s just a fun adventure into craziness that both Grillo and Butler have consistently delivered.