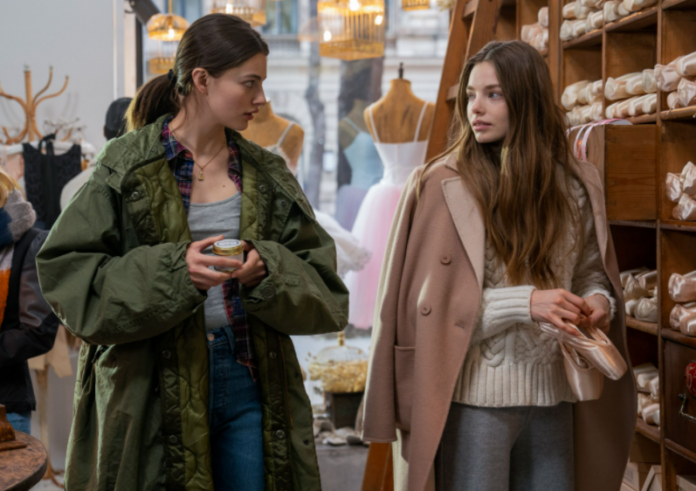 Kate Sanders (Diana Silvers, Space Force) is an ambitious and gifted, if tomboyish, aspiring ballerina from Virginia. She comes from a single parent, low-income household and is given a scholarship to attend a prestigious ballet school in Paris, France. Upon arriving at the cutthroat, internationally-renowned institution, her confidence and emotional fortitude are tested by a beautiful yet mysterious returning dancer, Marine Durand (Kristine Froseth, Rebel in the Rye). She recently lost her brother (and dance partner) to suicide. While confrontational at first, Kate and Marine’s relationship evolves into an emotionally-charged, competitive bond beset by lies, sexual awakening and, ultimately, emotional breakthrough as they risk everything to win the school’s ultimate prize: a contract to join the Opéra national de Paris.

Birds of Paradise is based on the book “Bright Burning Stars” by A.K. Small; written for the screen and directed by Sarah Adina Smith (Buster’s Mal Heart, The Midnight Swim, Room 104). Kate is constantly scrutinized for being an American student on scholarship and Marine suffers severe mental anguish over the death of her twin brother. Despite their personal turmoil on top of training for the ballet student competition, the girls decide to make a pact: win together or not at all. As time gets closer to winning the prize, their pact and friendship are tested by growing affairs in and outside of their lives as ballet dancers. Marine seeks advice from the devil, so to speak, Madame Brunelle (Jacqueline Bisset, Casino Royale, 1967) as Kate gets sucked deeper into the web of sex, blood, and money that controls ballet. The chemistry of Silvers and Froseth is a phenomenal pairing for the leads of this film. They are independstrong and independent on their own but together, a fantastic blend of two wildly exotic birds coexisting harmoniously under the same blanket of velvet sky.

Every word and scene easily leads to the next but with the desire of wanting to see more. The dialogue for Birds of Paradise perfectly sinks to the story as the choreography paints a beautiful picture of the insight leading up to the stage that’s magnified yet masked by exquisite performances. The musical soundtrack, set, and costume designs are also perfectly matched as well as gorgeous. The film possesses a slow and somber tone that magnificently conveys a well blended combination of classical and modern art that is relevant to the story and message. The final performances of Kate and Marina are fucking brilliant and are standing ovation worthy. As much as the details are on full display and may drag on a bit, Birds of Paradise is Center Stage mixed with Black Swan and is a low key visionary masterpiece. A must see for sure.

Birds of Paradise will be released on Prime Video September 24th.