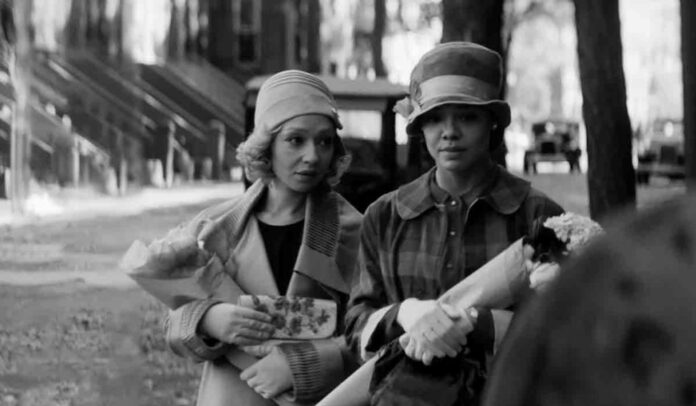 You know what nobody ever in life has ever said? “Boy, being black sure has made my life easier!” Throughout history, society has always perceived the races differently and treated them differently as a result. Rebecca Hall’s directorial debut, Passing, looks at this from the lens of two Black women who are light enough to pass for white, and the choices they make in an attempt to have a better life.

The film is an adaptation of Nella Larsen’s novel, and stars Tessa Thompson and Ruth Negga as fair-skinned Black women in 1920s Harlem. Both can pass for white, but one makes it her entire identity while the other chooses a different path. But the film is about more than just “fitting in”, it’s also about the lengths some will go to escape prejudice, it’s about motherhood, identity, female friendship, and so much more.

I thought this was a brilliant, elegantly-told debut from Hall, but it’s also a showcase for Thompson and Negga. It’s Negga who has the flashier role, but both women are absolutely terrific.

Adapted from the celebrated 1929 novel of the same name by Nella Larsen, PASSING tells the story of two Black women, Irene Redfield (Tessa Thompson) and Clare Kendry (Academy Award nominee Ruth Negga), who can “pass” as white but choose to live on opposite sides of the color line during the height of the Harlem Renaissance in late 1920s New York. After a chance encounter reunites the former childhood friends one summer afternoon, Irene reluctantly allows Clare into her home, where she ingratiates herself to Irene’s husband (André Holland) and family, and soon her larger social circle as well. As their lives become more deeply intertwined, Irene finds her once-steady existence upended by Clare, and PASSING becomes a riveting examination of obsession, repression and the lies people tell themselves and others to protect their carefully constructed realities.