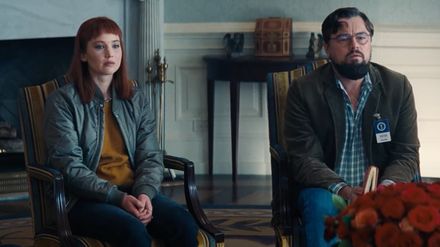 If you just read the simple synopsis, it may not seem to be the case that Adam McKay is doing anything political with his new film, Don’t Look Up, I don’t think that’s the case. The star-studded film, which is led by Jennifer Lawrence and Leonardo DiCaprio but features a Murderer’s Row of A-listers, follows a pair of scientists trying to warn the world about a comet that will destroy the planet. Of course, nobody believes them and the entire issue turns into a political football, sortof like what we’re going through with the pandemic right now.

Over the weekend, Netflix debuted the first clip from Don’t Look Up, which features the two leads along with Rob Morgan, Jonah Hill, and Meryl Streep as the POTUS who would rather “assess” the situation than do anything about it.