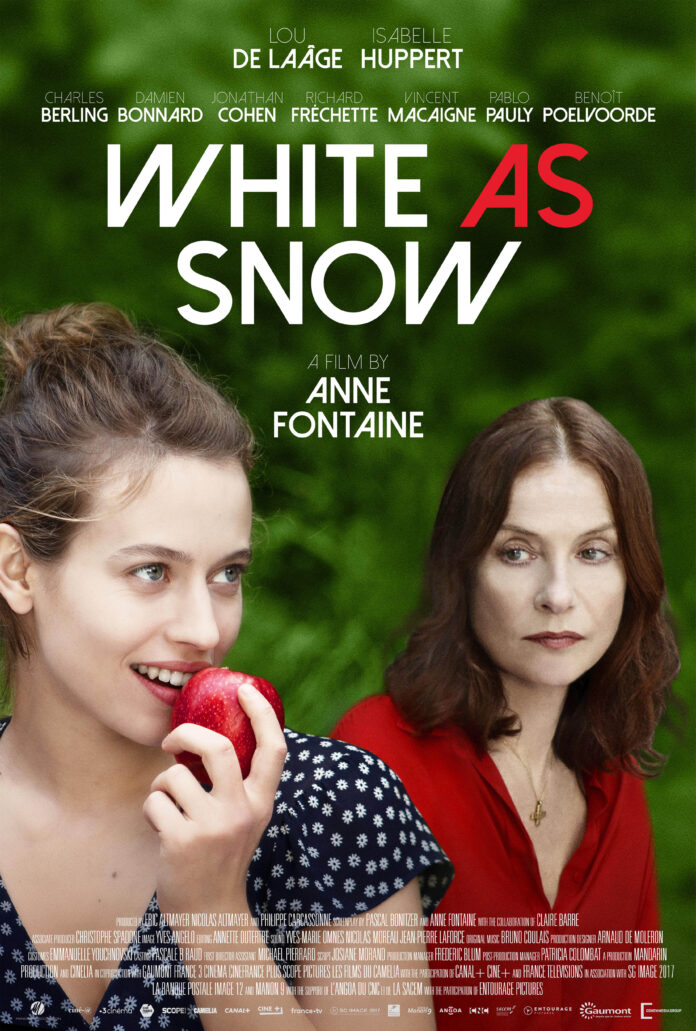 White as Snow is the latest French film from director Anne Fontaine (The Innocents, Coco Before Chanel, How I Killed My Father, Adore) that has a modern day approach of female sexual liberation to the Brothers Grimm classic tale of Snow White and the Seven Dwarfs. This film includes elegant scenic visuals and is considered a dark and sensual comedy.

Claire (Lou de Laâge, The Innocents and Breathe) is a beautiful but quietly reserved young woman who works at her late father’s hotel. Her strict stepmother Maud (Isabelle Huppert, Elle, Things To Come and The Piano Teacher) manages the hotel after her husband’s (Claire’s father) death and is deeply concerned about her ageing image. It is unclear when and how he passed as there is no mention of that information at all. As it turns out, Maud (Huppert) has a lover of her own.

Bernard (Charles Berling) is the manager of the hotel and has been involved with Maud for years. She entire fashions is saturated in deeps reds that portray the dark jealousy she possesses. Maud, growing bored of their affair as it was no longer one, decides that it’s time to call it quits with Bernard. However, Claire unknowingly sparks a burning jealousy in Maud when she overhears her ex lover lusting over Claire’s beauty and devises a plan to make her “go away”.

While out jogging, Claire is kidnapped and thrown into the trunk of a car. She is driven far from home along roads that wraps around the French mountains. There are beautiful images of lush vegetation, stone archways, and deep cliffs cascading down the mountain country roadside. A wild boar runs across the road and sends the car swerving into a tree. The trunk pops open and Claire is able to escape into the woods. The kidnapper catches up to her and the scene goes dark when a gunshot is heard. Claire awakens, unharmed, to find that she is in a rural cottage that’s located outside of a small village.

This is where White as Snow turns weird and super ridiculous for me. Overnight, her formerly shy demeanor is gone and she is suddenly aware of her feminine power. She meets Pierre (Damien Bonnard) who admits to killing her kidnapper and taking her for safety. Instead of wondering what the hell happened to her and how to get back home, Claire decides to sleep with Pierre instead. Then his twin brother, Francois (also Bonnard) when she mistakes him for Pierre. She laughs at the mistake which then begins her endeavor of sexual emancipation.

As Claire meets more local men in this small village, she starts to take joy in her new found escapade and soon, seven men fall for her youthful feminine beauty. Sam (Jonathan Cohen) is a local vet and tends to Vincent’s dog. He is tense and very needy. Charles (Benoit Poelvoorde) and Clemente (Pablo Pauly) are a father and son duo who both have sexual desires for Claire. Vincent (Vincent MaCaigne) lives with the twins and is a hypochondriac who beautifully plays the Cello. And finally, there is priest Pere Guilbaud (Richard Frechette) who drives a motorcycle and more or less, oddly encourages Claire’s sexual prowess.

For the first time in her life Claire allows herself to indulge in no-strings sex. She takes pride in belonging to no one and chooses not to care how her actions affect anyone else. Maud arrives at the village after being contacted by Claire and wants to reconnect, aka kill Claire herself. The naive Claire must decide who to trust—her sophisticated but cold stepmother or the circle of thirsty men that all lust for her. Her careless and reckless lifestyle puts Claire at risk and her wayward wildness stir up trouble.

Huppert as Maud delivers a fascinating portrait of an older woman threatened by the freedom of her blooming and sexually awakened step-daughter . However, the relationship between Claire and Maud is, at best, cringe worthy and seriously uncomfortable to watch. Lou de Laâge is magnificent as Claire, the insouciant heroine of this sexually driven contemporary fairy tale. Unfortunately, it wasn’t enough to save White as Snow from being an overall disaster. I am all for sexual liberation and respectable experimentation but this film is a sloppy mess. Scenes between Claire, Maud, and the suitors are straight up sexual assault circumstances rather than it portraying innocent, carefree fun. Nothing about this film is comedic in any way and reads more of an underwhelming softcore porn version of this Brothers Grimm tale that I absolutely don’t recommend.  Total disappointment.

White as Snow will be in theaters August 13th.

Review: ‘Keep An Eye Out’