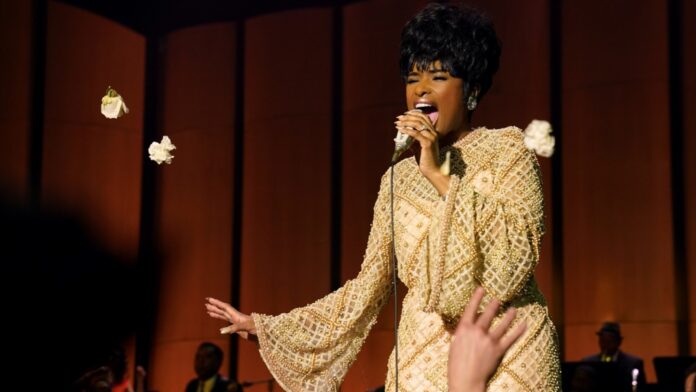 When we first meet Aretha Franklin in Liesl Tommy’s accomplished biopic of the Queen of Soul, she’s still just a little girl. Played by Skye Dakota Turner, Aretha, or “Ree-Ree” as her family and close friends (many of them huge stars like Smokey Robinson, Martin Luther King Jr., and Sam Cooke) call her, just wants to entertain. Her voice already powerful enough to incur the jealousy of jazz great Dinah Washington (a ferocious Mary J. Blige), the young singer is a jewel in the eye of her powerful father, minister C.L. Franklin (an intimidating but vulnerable Forest Whitaker). And yet, as one of the attendees of another star-studded get-together begins to abuse the child, we get the sense that Aretha will always be fighting to break free from the controlling grip of others.

That is, essentially, what Respect is all about; Aretha using her music and her faith to discover who she truly is. While the particulars of the film are well-worn tropes of the genre: the troubled childhood, the rise to fame, the inevitable collapse due to substance abuse, and the reemergence, what makes Aretha’s story special and personal is how much her faith and family contribute to every detail.

Oh, and of course, Jennifer Hudson. While the decision to have Hudson play Aretha from her teenage years on up is a bit confusing, there’s no question the right choice was made the moment she begins to sing. Hudson’s commitment to the role is staggering, and her voice is dynamic enough to send chills. The same goes for her young co-star Turner, who plays Aretha from ages 10-to-12. When a guest comments that Ree-Ree “has a voice going on 30” it isn’t hyperbole; this child can belt one out! She also has the challenging burden of depicting Aretha’s many early traumas, which caused her to be mute for a stretch of time.

It was the church that brought Aretha out of her quiet spell, and through the film we see how big a role church played in her growth. But even as she inspires the parishioners with one soulful hymn after another, there’s the sense that even these moments of happiness are manipulated. Aretha’s father is a constant, looming presence, managing her career with an iron grip matched by his control of her personal life. When a shady Ted White (Marlon Wayans) enters Aretha’s life, C.L. ain’t havin’ it. And when C.L. lands Aretha a recording contract with Columbia Records, even that feels like something of his doing and not because of her overwhelming talent.

But the film is called Respect for more than just her hit single. Penned by Tracey Scott Wilson, Respect is about a uniquely-talented black woman finding her voice at a time of great racial turmoil, overcoming personal demons and abuse by men who wanted to keep her quiet while cashing in on her voice. The film doesn’t truly take off until Aretha starts to make that turn, beginning with the introduction of Marc Maron (Is he Hollywood’s go-to record producer dude?) as legendary producer Jerry Wexler. When he takes Aretha down to Alabama to work with the funky white dude musicians at Muscle Shoals, much to Ted’s chagrin, she finally finds her true sound.  At this point, the film really digs into her catalog of amazing hits to emerge from this unlikely union, becoming a truly rousing crowd-pleaser that will lift you out of your seat!

Still, one can’t help but feel there’s a lot left on the table. Aretha’s struggles with alcohol are a blip on the radar, even though they help lead her on the path back to Jesus. Also, the sexual abuse she endured as a child, which led to her becoming an extremely young mother (one of the most shocking images is of a pregnant Ree-Ree) are teased and whispered about, but never truly confronted. And speaking just for me, I sorta wanted to see the movie stay with Aretha as she discovered her sound with the Muscle Shoals guys. The blast of diverging personalities and styles in that room is just so enjoyable that it’s a drag to get pulled back down into Aretha’s marital turmoil (Ted is in full Ike Turner mode), identity issues, and doomed friendship with MLK.

Those looking for a complete life biopic of Aretha Franklin aren’t going to get that here. Respect is focused on one of her many struggles and her overcoming of that is as heart-swelling as Jennifer Hudson’s vocals are soaring. Sure, the film is simply playing the hits, so to speak, but those hits have rarely sounded better.