The newest iteration of the Ted Bundy story is here in No Man of God. The film takes a slightly different turn than its predecessors. No Man of God focuses on the last few years of Bundy’s (Luke Kirby) life. It was during this time that a strange relationship forms between Bundy and FBI profiler Bill Hagmaier (Elijah Wood).

In the late 1970s there was a push from the FBI to try and understand the psychology behind crime. They felt that understanding serial rapists and killers would help the bureau be able to combat future perpetrators. The department began employing profilers with this goal in mind. Hagmaier was the bright-eyed and bushy-tailed rookie of the group. This jumpstart attitude led to him taking on the Bundy case. Bundy notoriously hated law enforcement and would try and play games with them. Hagmaier quickly realized that to get answers from Bundy, he would have to take a different approach.

On numerous occasions from the mid to late 1980s, Hagmaier visited Bundy at the Florida State Prison where he was being held. In between the visits, the two would keep in contact by writing letters. Hagmaier was on a mission to find out how Bundy thought and why he committed his crimes. Bundy found interest in Hagmaier and considered himself an expert profiler as well. Bundy went so far as to try and convince various police departments to let him assist on cases. As time passed, their relationship grew stronger and more personal – transitioning into a possible friendship. Bundy was steadfast about the similarities between him and Hagmaier. He pontificated that minute decisions from their past could lead to them swapping places. This ideal was one that plagued Hagmaier as he struggled to get it out of his head. 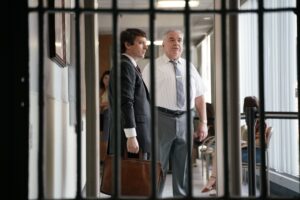 No Man of God is inspired by FBI transcripts, recordings, and Hagmaier’s own recollections of his exchanges with Bundy. The fact that the film stems from real life interactions gives it an additional chill. Bundy was known for his good looks, charisma, and ability to manipulate those around him. Films depicting him have toed the line of virtually glorifying him. While No Man of God doesn’t exalt Bundy like other films, it does not truly dive into the monster. Towards the end of the film, we get more of a glimpse. However, that is few and far between. A majority of the runtime is a more charming and intellectual Bundy.

No Man of God is directed by Amber Sealey and written by Kit Lesser. It is Lesser’s first feature length script. The script has numerous interesting ideals – and repetition from Bundy about many of them. He insists upon his innocence and hammers home the idea that he’s no different from the average person. That everyone has the same drives and notions. Both Kirby and Wood give notable performances, but Kirby is top notch. Portraying a notorious serial killer is not an easy feat, but Kirby manages to do so masterfully. His mannerisms and facial expression create an aurora of comfort from Bundy. Yet beneath that is still a layer of creepiness and terror. Kirby perfectly captures Bundy’s cockiness as he plays a cat and mouse game with Hagmaier. Kirby and Wood are both a joy to watch. Their chemistry is apparent throughout and drives the film forward.

The cinematography, along with Kirby’s performance, are the most memorable aspects of No Man of God. The two men spend a majority of their time in a single prison room. The various camera angels and partially obstructed shots flawlessly capture the claustrophobic feel. There are a few shots that will stick in the audience’s mind for quite some time. The film’s score seamlessly complements the cinematography. The music shifts from ominous tones to more intense melodies as the end is drawing near. No Man of God does not reinvent the wheel, but it’s unique perspective of Bundy’s final years and the stellar performances make it worth a watch.

No Man of God is available in theaters and digital.