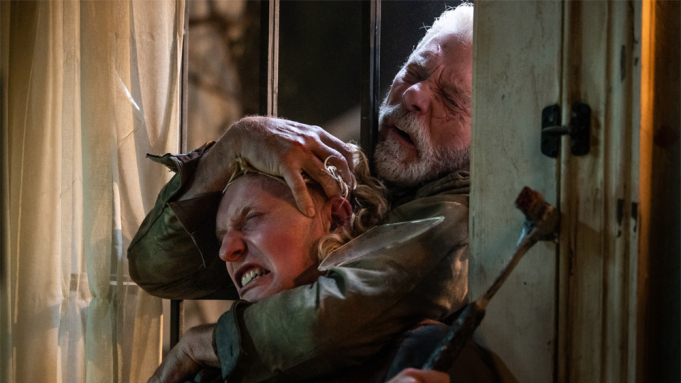 Back in 2016, Don’t Breathe was a highly-effective home invasion thriller with clever cinematography and sound editing, but also  breakout character in Stephen Lang’s “Blind Man” Norman Nordstrom. As the victim of criminals stalking through his crib in search of hidden cash, Norman gained our sympathy even as he ruthlessly took down the invaders…until a shocking twist revealed that he was actually far worse than a handful of petty thieves. It’s not necessarily a bad thing to continue Norman’s story in Don’t Breathe 2, but in a ludicrous attempt to rehabilitate the character first-time director Rodo Sayagues and co-writer Fede Alvarez (director of the first movie) twist themselves into knots without ever realizing realizing that redemption is beyond their grasp.

One of the many problems with Don’t Breathe 2 is that Norman is exactly who we know him to be, and that is positivel grotesque. In the first movie it’s revealed that Norman, an aged military vet, is a mass murderer and someone who kidnapped a woman with plans to forcefully impregnate her so she could give him a child. Yeah, this guy’s a piece of work. So given this backstory, it’s particularly distressing that the sequel is all about his fitfulness as a dad. Say what? As a fire rages, we see a young girl faint after exiting the burning house. She is then rescued/acquired by Norman, who takes her home and raises her as his own daughter.

The girl, named Phoenix (Madelyn Grace) presumably as some kind of joke about rising from the ashes, is a headstrong kid, ironically raised by Norman to be fearful of the world’s dangers. Uh, hello! Killer rapist right in the next room, darling! In the early going, we see Phoenix put through tests of survival, chased by Norman’s loyal canine, and home schooled so she can avoid what lurks in the deadly Detroit public school system. But is it actual protectiveness, or just that Norman doesn’t want his secret to get out? Of course, girls being girls, Phoenix wants to get out and make real friends. Norman politely declines this request.

“I already lost a daughter once”, he mourns.

Um, yeah, and what did you do to try and replace her? Ohhhh yeah, that inconvenient little nugget is still out there. It’s like the screenwriters assumed everyone who saw the first movie somehow forgot. We didn’t forget.

Since it’s impossible to ignore who Norman is, they basically flip what they accomplished so well the last time. It isn’t long before a new group of goons, led by a snarling, overacting Brendan Sexton III, bust into Norman’s home, killing anybody who gets in their way. And this time they aren’t looking for money, they want Phoenix. Why? Well, that’s the movie’s big twist and completely shifts the narrative so it won’t be spoiled here. The reveal isn’t really a shock since, again, we know who Norman is, but its impact is on how it affects his relationship with Phoenix which would be quite sweet if we were totally ignorant.

But the plan of attacking this bizarre sequel is laid bare: introduce characters worse than Norman so he doesn’t seem so bad. This misguided effort is repeatedly undermined by a confused script unsure of how to frame Norman from scene-to-scene.  There’s a constant clash between his unrelenting brutality, with the director more than eager to show how gory his kills are (one guy bashed with a shovel meets an especially gruesome fate), and the kind-hearted father figure in need of redemption. But there can be no redemption, no matter how many weird twists and turns the story takes. And trust me, it gets REALLY strange as there’s a whole thing about an organ trafficking ring that is telegraphed with the subtlety of a thrown brick.

Alvarez is a more skilled director than Sayagues, that should come as no surprise, but the latter proves capable in crafting really intense cat ‘n mouse sequences. The break-in finds Norman and Phoenix chased quietly throughout the home, which has been tricked out to Panic Room levels. The maze-like structure is perfect for someone like Norman, as we saw in the previous film, and also great for setting up some nasty encounters. One, which finds Phoenix trapped in a metal box filling with water, is gripping stuff for the psychological torment it’s placing on a young child, matched by Norman’s physical fights on the outside.  Sayagues doesn’t have the knack to play around with the audio/visuals the way Alvarez did, but he makes due by being straight-forward in the depiction of violence.

Credit also has to go to Lang, who has turned Norman into a deeply layered, conflicted character that the audience should feel some uneasiness about following. The problem isn’t with Lang’s performance in the least; he shifts fluidly from fatherly to menacing at the drop of an axe, and you can sense the deep wells of regret for Norman’s past sins. The issue is in presentation, and Don’t Breathe 2 fails as a reclamation project for the Blind Man. Some characters just aren’t meant to be antiheroes, and they don’t deserve sequels, either.