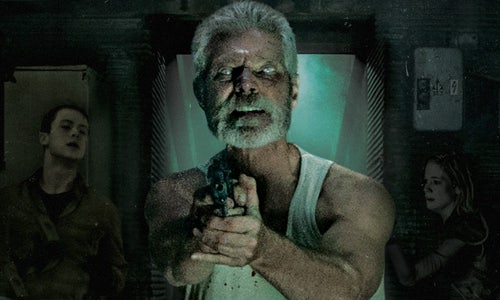 It’s commonplace for a low-budget horror to make a ton of money and launch into a bunch of sequels nobody asked for, but in the case of 2016’s Don’t Breathe what’s surprising is that we haven’t had one yet. The film, which was directed by Fede Alvarez in his followup to Evil Dead, made $157M and left audiences breathless with fear on a lean budget of under $10M.

So where’s the sequel at? Alvarez has been working on a script ever since, and it was reportedly completed in 2018, but it’s only now that Sony is really moving forward. THR reports Don’t Breathe co-writer Rodo Sayagues has been promoted to director. It’s a little surprising Alvarez isn’t tackling this himself given the success of the first movie, but Sayagues is a frequent collaborator and should  be more than up to the task.

Don’t Breathe starred Stephen Lang as a blind man who stalks and hunts down a group three friends trapped in his home after they broke in looking for $300K in hidden cash. The film ended on a cliffhanger with one of the intruders getting away, and the blind man very deliberately not telling the police about her escape.

It was previously reported the sequel would be titled Don’t Breathe Again, but I hope that’s changed. Reportedly, the sequel “is set several years after the home invasion of the first movie, with the Blind Man living in quiet solace…until his past sins catch up to him.”


With filming set to begin in April, we should learn more soon and maybe see Don’t Breathe 2 in theaters by 2021.