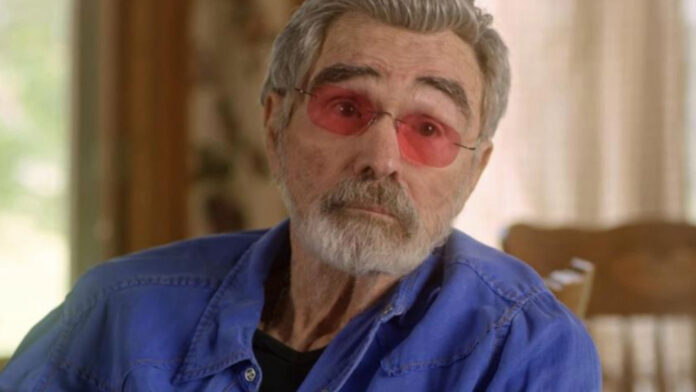 Defining Moments tells the story of an entangled group of people who are at a crossroads in their lives. Each story is conveyed like a chapter in a book. Eight individuals cross paths in a small Canadian town and encounter ‘defining moments’ around the same time.  Their pivotal decisions and significant experiences will fundamentally change the course of their existence. Stephen Wallis wrote the screenplay and directed the film. This is the last film Burt Reynolds stars in before his passing in 2018.

Marina (Polly Shannon) reconnects with her aging father, Chester (Burt Reynolds, Boogie Nights). The late actor stars as Chester, who’s shy of turning 80 and has decided he has nine months left with loved ones. “A baby takes nine months to be born,” he explains. “I’m taking nine months to say goodbye.” Believing her father has more time than he thinks, Marina decides to stay for a while to look after him anyway. Marina and Chester are seen throughout the film playing checkers and discussing their past memories. Eventually, Marina finds out what her father plans on leaving her upon his passing. With that realization sinking in, the two must find a way to clear the air before his time comes to an end.

Laurel (Tammy Blanchard (A Beautiful Day In The Neighborhood) is in her 40’s and just found out she is pregnant. With a grown child and the mentality that she already screwed up raising one kid, she is not ready for another. Her doctor and father Edward (Eric Peterson), who also confirms her pregnancy, believes she totally can. He thinks it may be good for her. Laurel tells her husband but he makes it clear he doesn’t want any more kids. Her husband is visibly not thrilled and she can see his unhappiness with their overall marriage. Laurel is determined to have the child even if it ends her relationship. Embracing her new pregnancy, she moves into her father’s home.

Edward (Peterson) is the town’s well-known and highly respected doctor. He is a wonderful father who cares very much for his daughter. Although a wife and Laurel’s mother is never mentioned or pictured, it’s clear he truly is a wonderful man. His character personality stands out the most and his great sense of humor had me cracking up at times. He soon learns that he has early Alzheimer’s and is forced to retire. To add to the mix, he is also learning to adjust to his daughter’s newly discovered lifestyle.

Jack (Shawn Roberts) is young, fun, and in a happy relationship with his beautiful blonde girlfriend, Terri (Kelly Van der Burg). Despite her best efforts, Jack refuses to let her meet his family. Their relationship is thrown into further turmoil when Jack terribly tries to explain that he’s not ready to be so serious. Heartbroken but respectful of his feelings, Terri leaves. Jack wants to spend the rest of his life with her. He must decide if he can step up to take his partner role more seriously. More importantly, would Terri even take him back?

Lisa (Sienna Guillory) is Jack’s fun-loving and down-to-earth sister. She very much loves her brother. Lisa is the little sister who always looks out for Jack. She is more than happy to fulfill that role however, she is also learning to live with MS (multiple sclerosis). MS is a chronic and progressive disease that causes damage to the nerve cells in the brain and spinal cord. Symptoms may include numbness, impairment of speech and of muscular coordination, blurred vision, and severe fatigue. Lisa does not discuss anything about her disease other than painfully admitting she has it. Her role leans more toward the mothering sister side even though she and her brother are both going through big changes in their lives.

Dave (Dillon Casey) and his three friends are Americans who are on holiday in Canada. Dave is suicidal and has made several attempts on his life. His friends take him on vacations to keep his mind off his dark thoughts. They are also the only “family” Dave has to look after him. Dave is unsuccessful at his attempts because deep down, he doesn’t want to actually die. He wants to learn why life is worth it but, at the same time, is running out of ears to blow off. Dave is committed to a mental health facility under the recommendation of the town doctor, Edward. He is put under the care of Dr. Kelly (Graham Greene, The Green Mile, The Twilight Saga). With the help of Dr. Kelly and an unlikely friendship in his ward, Dave slowly begins to gain a better understanding of the value of life.

Defining Moments has a poignant yet soft approach to the film’s title and leading subject portrayal. Wallis does his best to touch on issues that everyday people face but the overall expression lacked real/believable emotions. Peterson brings humor and Guillory beautifully embraces her role but the film and majority of actors felt underwhelming. The disappointing quality comes off in a Made-For-TV style. Definitely a cushy but grim reminder to never leave unfinished business. Always a nice idea however, this film is too sugar-coated for my taste. At least all you Burt Reynolds fans out there can see him in his final film. A fitting role for an iconic man and actor who in his own cinematic way, got to say goodbye.

Defining Moments is available in theaters and digital platforms now.