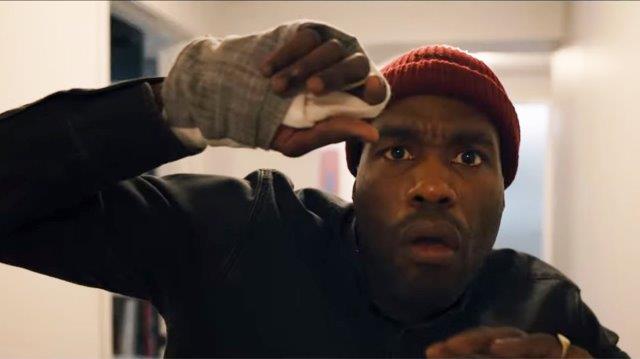 You know how impactful the original Candyman movie is, I don’t even want to type his name fives times in this review!

When the first film about an urban legend of a boogeyman with a hooked hand who will kill you if you say his name fives times in the mirror came out, it pretty much traumatized an entire generation and made us literally fear Tony Todd as the film turned him into a household name. While the subsequent sequels didn’t pop as much as the original, this franchise still has legs as we are still in fear of our hooked boogeyman. So much that writers Jordan Peele, Win Rosenfeld, and Nia DaCosta (who also served as director) blessed us with the 2021 version of Candyman.

The film centers on Chicago painter Anthony (Yahya Abdul-Mateen II) a visual artist who lives with his girlfriend Brianna (Teyonah Parris) in their luxury condo in “Cabrini” that now exists where the former Cabrini-Green “hood” neighborhood from the original as it has gone through extensive gentrification. Brianna is an art curator who wants her boyfriend to come up with a new idea for her upcoming show. Having been in somewhat of a slump, Anthony starts to explore some of the history of the city for inspiration where her starts to learn about the history of the city as it was decades ago and he has a chance encounter with William (Colman Domingo) and he starts to learn about the famous urban legend.

In doing so, Anthony opens a pandora’s box when he opens his exhibit “Say My Name,” which is not only visually intriguing, but it orients a new audience to the idea of saying the name of supernatural killer Daniel Robitaille, AKA you know who. Soon enough, bodies start dropping, primarily of white millennials and snobby art critics. This is not only making Anthony famous (and infamous at the same time), but he continues to dig deeper into the urban legend and his mind starts to slowly unravel into madness. While everyone is chalking things up to coincidence, he’s starting to believe the hype, to everyone around him’s detriment.

The script is very sharp and you can absolutely tell that this is coming from the mind of Jordan Peele. So far, his films are not “scary” scary, but instead speak to horrors that have existed and continue to exist in black circles, and this film is no different. The true monster in this story is really gentrification and how an artist can go mad trying to perfect their craft. The film spends a bulk of the time staking the claim of gentrification as an evil. Running down black neighbors to bare bones so that they are worthless, only for well do white up and comers can them come in and make it their own. But the secrets of the hood will always remain, no matter how many Whole Foods come in and replace the bodegas.

We also have to give props to director Nia DaCosta who puts together a visually impressive film. There are plenty of excellent uses of stick figure puppetry to use as a narrative storytelling device that not only helps sell and tell the story, but does it in such a creepy way that you cannot take your eyes off the screen. There are some interesting decisions in regards to the kills done. Sometimes they are incredibly graphic, yet in other moments the killing is done just out of eyesight and you have to rely on your hearing to get an understanding of just how graphic the throat cutting really is, which is an interesting choice. Another thing that really works for the film is when you see something that shouldn’t be there and almost have to do a double take. As the audience, you start to wonder if you are going just as mad as Anthony is having what you just witnessed.

Unfortunately, when comparing to the original, this film doesn’t feel as scary and enough to fill you with genuine terror. As stated before, many of Peele’s Monkey Paw films are not “scary” scary, which unfortunately works against the new film, because the original was just so terrifying. That said, this film swings for the fences in regards to what it wants to say about the horrors of race, gentrification, the police, well do millennials, the snobby art world, and a neighborhood that has to be abandoned to appease everybody else in the process. All the performances are great, especially Abdul-Mateen II, Parris, Domingo, and scene-stealer Nathan Stewart-Jarrett who plays Brianna’s brother Troy. This absolutely is a fun ride that’s also eerie and thought-provoking at the same time.

See, I told you I wasn’t going to say his name five times!

Candyman is available in theaters on August 27th.