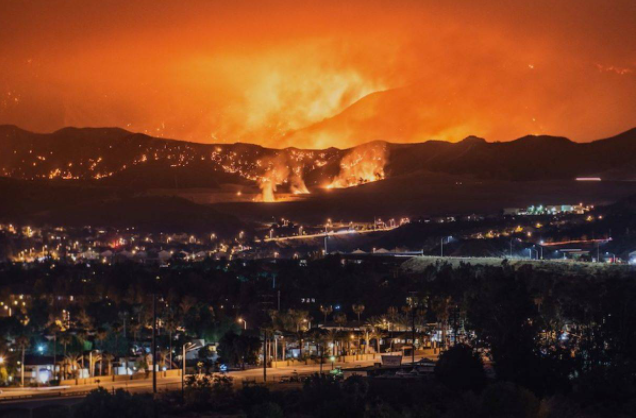 In early November 2018, raging wildfires forced a frenzied evacuation of thousands of terrified residents from the Californian cities of Malibu and Paradise. Two economically different communities with a very similar problem, wildfires. Fires burned so fast that people couldn’t escape their own homes or vehicles caught in traffic. Men, women, and children perished while desperately fleeing for safety. Barns and stables contained charred remains of animals still locked in their stalls. Bring Your Own Brigade is written and directed by twice-Oscar®-nominated filmmaker, Lucy Walker (Waste Land, The Tsunami and the Cherry Blossom). Instigated by a deep curiosity of the experience of moving from Europe to Los Angeles in 2008. Her new documentary builds up and captures the horror and heroism of wildfire disasters, survivors, and the aftermath that follows.

Upon traveling the L.A. freeway, Walker is met with fire burning the highway hillside as she’s driving by. Her first observation is that the other drivers are not concerned. It’s business as usual and a shocked Walker has even more questions after the two 2018 California wildfire disasters occurred. Her character-driven exposé seeks to answer those imperative questions humanity can no longer afford to ignore: Why are catastrophic wildfires increasing in number and severity around the world? Can anything be done to lessen the staggering death and destruction they cause?

Bring Your Own Brigade features interviews with survivors, firefighters, scientists, and Native American (fire control) specialists. Walker and her team collected hundreds of hours of astonishing footage and haunting emergency calls. Voices heard are of terrified people who are lucky enough to recount their tale to the pleading last words recorded of those who didn’t make it. The data that Walker and her team provide, expose how poignant and broken this whole dilemma really is. Truly heartbreaking so grab tissues!

Yes, climate change is a factor. However, it’s NOT the only source responsible for unleashing this literal “hell on earth”. Walker’s film reveals that there are numerous, often simple steps that can prevent the spreading of wildfire. To not only mitigate the catastrophe, but restore health and balance of woodlands to home construction/zoning that have been mismanaged for far too long. Unfortunately, society has an outdated thinking perception and no care for long term interests regarding this issue. This blatant ignorance is quite literally, burning our world to the ground.

A bulk of humans with the same craptastic opinion simply do not care enough to look out for anyone else but themselves. The driving force, money and not being told what to do. Fire prevention and safety is ignored and degraded by the logging industry and the offices of regional planning and building codes. Insurance companies are dropping clients and refusing to cover anyone who lives in these areas who don’t meet safety requirements. There’s a shortage of fire responders due to lack of funding, a growing suicide rate, and no real plans by cities for actual emergencies. Any form of relief and/or aid is paid by the taxpayers of the state and the rich don’t want to wait in line. This rift has caused a further and unnecessary divide between the rich and poor.

The title of this film stands out to me the most. I thought the line was more suggestive to the general approach of fire rescue until I heard a survivor explain its true meaning. Helping your family, friends, and neighbors to go after the immediate emergency. To put out the fire as quickly and efficiently as possible. Bring whatever you can to help, right? Although the message/title does lean that way, it certainly is not what I initially expected. To know what what it really means will piss you off. If it doesn’t, it should. I am.

Bring Your Own Brigade is more than just a wildfire documentary that expertly provides truth and answers. It’s an eye opening, thought provoking, soul inspiring, gut punch film that should be watched globally and shared/taught in schools for years to come. This film could change the course and outlook of how fire prevention and measures are handled, for the better. We have enough answers but will it be enough for people to respectfully and equally combat this growing crisis for the future? A must see, for sure!

Bring Your Own Brigade will be in theaters August 6th and will be available on CBSN and Paramount+, August 20th.