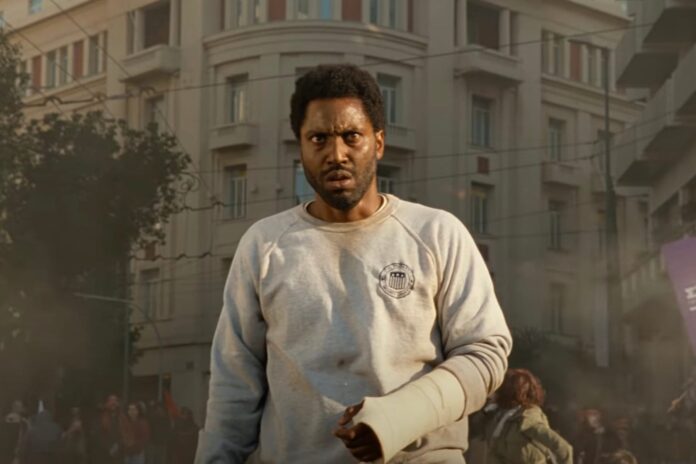 It’s been a few years, but there was a time when I used to joke about Netflix’s early attempts at original movies, and how they would all immediately sink “into the memory hole.” It’s like they weren’t actual films at all; they would be released and then disappear as if they never happened. The streamer has scored enough legit hits that it doesn’t happen that much anymore, but then a forgettable thriller like Beckett arrives to remind you the old times  aren’t completely in the rear view. With stars the  caliber of John David Washington, Vicky Krieps, Alicia Vikander, and Boyd Holbrook, and a gorgeous Greek locale, it’s amazing how painfully bland and unremarkable this movie is.

There’s a lot that goes wrong here, and much of it has to do with Washington. While not a bad actor, I think it’s time to pull back on comparisons to his father, Denzel. Washington plays the eponymous Beckett, a man traveling through Greece with the love of his life, April (Vikander). They’re the type of couple that gaze longingly at one another even when the other is just stepping out to get coffee or something. A mysterious backstory is teased for her; he’s something of a dorky flake with zero personality. When she plays a game making up colorful pasts for other tourists, he’s got nothing to add.

With political unrest boiling over in Athens, Beckett and April hit the road, taking a dangerous evening journey in an unfamiliar area. When he falls asleep, the car skids off the road and crashes into a house. She’s thrown from the car, and he wakes up in time to see a red-haired kid hurriedly whisked away. Later, he finds himself in a hospital, racked with grief and guilt over April’s fate, and interrogated by a police officer. After bucking orders and leaving to go back to the crash site, Beckett is shot at by a woman who apparently trained at the Stormtrooper Academy, joined by the same cop who questioned him earlier.

And just like that, the chase has begun, with Beckett pinballing from one near-death scenario to the next, accumulating more bruises than a rotten apple. Eventually, he encounters Lena (Krieps), a liberal activist on her way to a protest rally in Greece. She gets ensnared in helping this confused American and becomes, literally, the only person he can actually trust. That’s true even when he manages to somehow evade capture or death and make it to the U.S. Embassy where the official he meets is played by Holbrook. Literally, the first thing that popped in my head upon seeing him “Well you obviously can’t trust him because it’s Boyd Holbrook”! Overall, I can’t imagine why anybody in this movie, especially Vikander who must have lost a bet. Isn’t there a Tomb Raider movie she could be doing?

The film is directed by Italian filmmaker Ferdinando Cito Filomarino, frequently the AD for Luca Guadagnino, who is on board here as a producer. There’s potential here for a Fugitive-style political thriller, with Washington the innocent man thrust into a paranoia-filled world of conspiracies. And at times it seems like that is the direction the film will go; much is made of the disparities within the government and corrupt elements within, but none of it has any meat on the bone. Further, Beckett’s becoming so entrenched in aspects of it never makes any sense, and it doesn’t help that his personality stays so frustratingly blank. When he miraculously gains the combat skills of a Terminator we don’t care enough to question where this dweeb got them. As Krieps’ activist Lena instantly becomes the more interesting of the two, it’s more than just a testament to her overwhelming acting ability. Beckett is just not particularly interesting, and Washington miscast in a role that diminishes him. Think of his best performances in BlacKkKlansman or Malcolm & Marie, he practically leaps from the screen. In Beckett, he’s a mediocre, ordinary part of a mediocre, ordinary movie that should make Netflix more discerning about their output in the future.

Beckett is available on Netflix now.