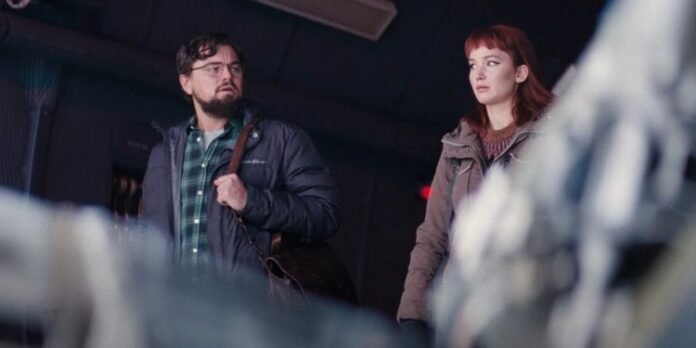 Every now and then Netflix likes to show off its dominance in the streaming wars. It might be revealing the astronomical viewership numbers for one of their films. Or in today’s case, it’s announcing release dates for 42 (!!!) upcoming projects, including some heavy-hitter titles like Adam McKay’s Don’t Look Up, Jane Campion’s The Power of the Dog, and Rebecca Hall’s directorial debut, Passing.

The big one here is Don’t Look Up, which will open in the awards season slot of December 10th in theaters, followed by streaming on December 24th. It’s another starry ensemble for McKay (he’s been doing this since Anchorman) and is led by Leonardo DiCaprio and Jennifer Lawrence as astronomers who set out to warn the world that a planet-killing comet is on the way. How well do you think that goes? Um, have you seen the way some people have responded to scientific data when it comes to COVID-19?

Also announced is Lin-Manuel Miranda’s directing debut, tick, tick…Boom! starring Andrew Garfield in a performance that some are saying will be a future Oscar contender. That film, which also stars Vanessa Hudgens and Alexandra Shipp, opens on November 12th in theaters followed by Netflix a week later.

AFTERLIFE OF THE PARTY — On Netflix 9/2

KATE — In select theaters and on Netflix 9/10

MY LITTLE PONY: A NEW GENERATION — On Netflix 9/24

THERE’S SOMEONE INSIDE YOUR HOUSE — On Netflix 10/6

STUCK TOGETHER On Netflix 10/1

HYPNOTIC — On Netflix this October

FEVER DREAM — In select theaters and on Netflix this October

7 PRISONERS — In select theaters and on Netflix this November

A BOY CALLED CHRISTMAS — On Netflix this November

A CASTLE FOR CHRISTMAS — On Netflix this November

THE PRINCESS SWITCH 3 — On Netflix this November

SHAUN THE SHEEP: THE FLIGHT BEFORE CHRISTMAS — On Netflix 12/3

BACK TO THE OUTBACK— On Netflix this December

MIXTAPE — On Netflix this December

SINGLE ALL THE WAY — On Netflix this December