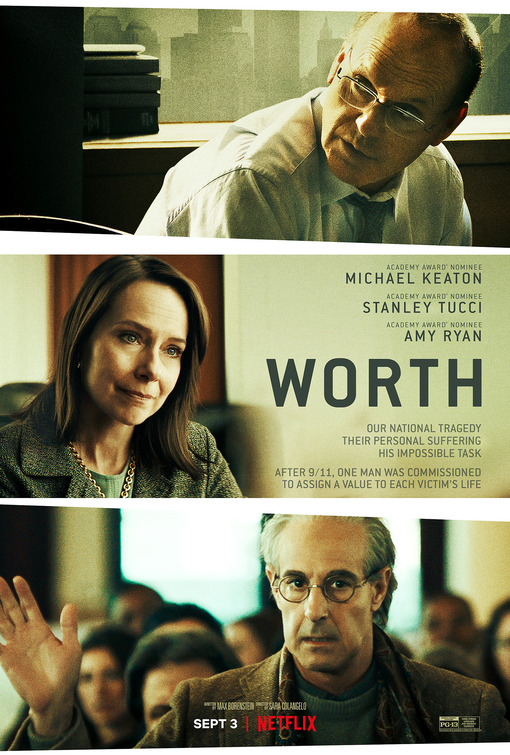 We’re happy to offer our readers the chance to attend a very special event for Netflix’s upcoming film, Worth, starring Michael Keaton, Amy Ryan, and Stanley Tucci! On Tuesday, August 31st you can take part in a free virtual screening of the film followed by a Q&A with Ken Feinberg, Camille Biros and Screenwriter, Max Borenstein, moderated by DC Film Society Director, Michael Kyrioglou!

SYNOPSIS: Following the horrific 2001 attacks on the World Trade Center and Pentagon, Congress appoints attorney and renowned mediator Kenneth Feinberg (Michael Keaton) to lead the September 11th Victim Compensation Fund. Assigned with allocating financial resources to the victims of the tragedy, Feinberg and his firm’s head of operations, Camille Biros (Amy Ryan), face the impossible task of determining the worth of a life to help the families who had suffered incalculable losses. When Feinberg locks horns with Charles Wolf (Stanley Tucci), a community organizer mourning the death of his wife, his initial cynicism turns to compassion as he begins to learn the true human costs of the tragedy.

To attend, simply RSVP to the event here. RSVPs will be accepted until end-of-day on August 25th so get them in now and enjoy the show!

Worth opens on Netflix on September 3rd.

DC Readers: Attend A Free Early Screening Of ‘Minions: The Rise Of Gru’

DC Readers: Attend A Free Early Screening Of ‘Marcel The Shell With Shoes On’