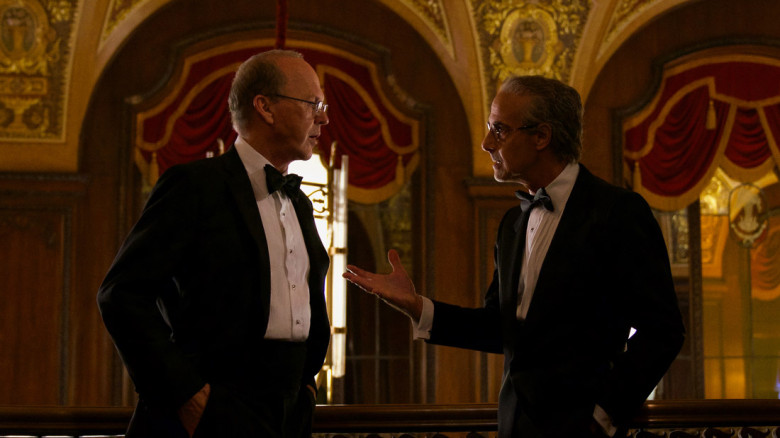 What is the value of human life? Can you place a dollar figure on a person’s life? “What is life worth”?  That’s the question posed by Kenneth Feinberg (Michael Keaton) to a group of law students in the opening minutes of Worth, a somber, sympathetic, and conventional drama about the process of compensating the loved ones of 9/11 victims.  Feinberg has an actual answer to the question, too, utilizing established formulas to come at a reasonably acceptable number for all parties. For a straight numbers guy like Feinberg, who initially believes there’s no such thing as fairness, this is easy to do. Of course, real-life doesn’t work that way, and people aren’t just numbers in a spreadsheet.

The September 11th Victim Compensation Fund was established just days after the World Trade Center attacks, and its goals were simple…at least publicly so. Outwardly, the goal was to provide tax free money to compensate the families of those who died. The real reason, as revealed in a scene in which Feinberg is in a room with the airline lobby, was to convince the families not to sue the airline industry, fearing lawsuits of that magnitude would cripple the economy. That was probably a load of bullshit, an excuse to let the airlines off the hook and put taxpayers on the hook.

Worth tries not to delve into those murky waters too much, it’s all about the no-win scenario Feinberg has put himself in in an effort to try and be just. The problem is that he lacks the simple human empathy to see beyond the cold, hard data, as evidenced by his first meeting with the victims’ families. Despite being warned that this is still too emotionally “raw” to be like his other compensation cases, Feinberg gives a textbook example of how not to speak to people in a state of grief. He’s not a bad guy, and definitely not trying to minimize the value of their loved one’s lives, but let’s just say Feinberg’s bedside manner is lacking. His heart is in the right place.

While Feinberg’s story and the victims’ individual tragedies are the movie’s heart, in its bones Worth is a Spotlight-esque procedural. What Feinberg must do is try to find the best way to get the best possible result, using the U.S. tort laws and abiding by each individual state’s laws regarding such matters. There is no one size fits all solution, and yet that’s what Feinberg sets out to try and find. That’s part of the reason Feinberg faces such stalwart opposition from Charles Wolf, a muckraking activist with a personal stake. He lost a loved one on 9/11, too. Rogers begins to rally support with a grassroots “Fix the Fund” campaign that Feinberg isn’t prepared to handle. Nor is he ready for those stories which fall outside the lines of the Fund’s guidelines; such as a gay man whose partner died in the Towers and now can’t receive any compensation, or a mother whose firefighter husband died a hero but maybe didn’t lead such a perfect life.

Worth easily could’ve fallen into cheesiness and schmaltz, but screenwriter Max Borenstein’s delicate script only occasionally falls into oversentimentality. Director Sara Colangelo finds dignity in each parties’ case, doing her best to give them moments of deep reflection and impact. She sets out and ultimately succeeds in showing their worth in reorienting Feinberg’s priorities, because what good is being the consummate professional if nobody likes you? If you don’t have the compassion to be flexible to help a person in need? That said, Worth does lay on the heavy, tear-jerking stuff on pretty thick. Heartbreaking testimonials come in waves, and actual footage from the World Trade Center aftermath may still be triggering for those personally affected. Less would’ve been more effective.

Keaton’s hard Boston accent takes some getting used to, but he’s not doing it for flash. This is a nuanced role, and Keaton plays it as close to the vest as he can. He’s given as much he gives by Tucci, whose typical pointed-antagonism is given a sad tinge here Others in the cast are strong, as well, including Amy Ryan as attorney Camille Bros who takes the brunt of so many heart-rending stories she encounters on a daily basis. Another standout is Tony-nominated actress Laura Benanti as the firefighter’s widow, who wants her husband’s story told more than she wants a payoff.

It’s not accurate to call Worth a feel-good story, because there’s nothing happy about what happened. Compensation won’t bring loved ones back, a little bit of money won’t fix all of their problems, and some people just flat out won’t get a dime even when they should. Worth does acknowledge the imperfections of any system meant to put a value on a person’s life. It takes Feinberg a while to get there, and when it does it happens a little too easily. But what matters is that he gets there, and comes to realize that all of his rationalizings doesn’t add up to much.