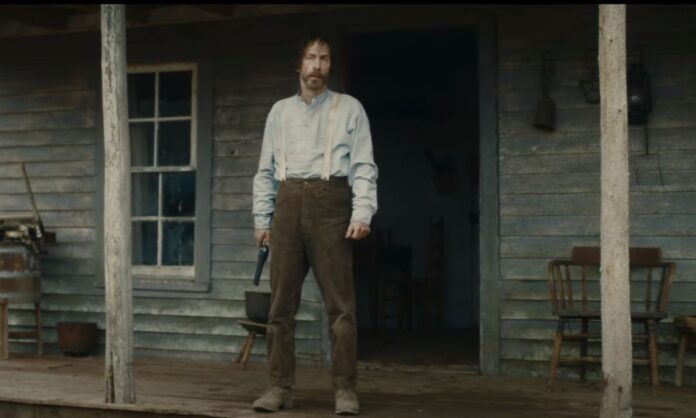 People aren’t always who they appear to be, a lesson a gang of bank robbers appears to be learning in the trailer for Potsy Ponciroli’s new film Old Henry. When an old farmer finds a man on the plains near death with a gunshot wound, he does the decent thing and brings him back to his house until he heals. What the farmer and his son soon find out is that the people who put the bullet in the bank robber are looking to finish the job. Seems like a pretty standard siege film, with the bad guys on the outside and the good guys holed up in the farmhouse. It seems that way right up until the framer introduces himself as Henry McCarty.

Now, if that name doesn’t ring a bell you are probably not a history buff (or a Young Guns fan), but as those of us in the vein of historical nerdery or Young Guns fandom knew right away that name is an alias belonging to none other than Mr. William H Bonney, aka Billy The Kid.

I LOVE a good historical revision. Inglorious Basterds and For All Mankind being two recent favorites, and by all accounts it appears that I’ll be adding Old Henry  to that list here soon. Other then the obvious awesomeness that the plot promises the cast adds a level of credit that would otherwise be lacking. Tim Blake Nelson, being the obvious frontrunner but Richard Speight Jr. and Stephen Dorff seem to appear in films I like more often then not.

Check out the trailer below and look for Old Henry in theaters on October 1st, 2021

Old Henry is an action-Western about a widowed farmer and his son who warily take in a mysterious injured man with a satchel of cash. When a posse of men claiming to be the law come for the money, the farmer must decide whom to trust. Defending against a siege of his homestead, he reveals a talent for gunslinging that surprises everyone, calling his true identity into question.