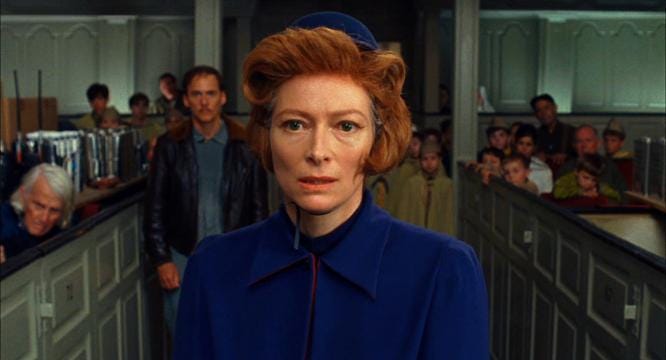 It’s been almost seven years since we’ve gotten a new live-action Wes Anderson film. Sure, we got the so-so Isle of Dogs in 2018, but its been a long time coming since we got to see our favorite Anderson players in person.

Variety revealed Wednesday that Anderson is set to shoot a new movie in Spain this coming fall with Tilda Swinton in the starring role. This will be the fourth collaboration between the actress and director, the first being 2012’s Moonrise Kingdom and 2014’s The Grand Budapest Hotel. Anderson told the outlet he’s “not ready to share any details” about the upcoming film. Swinton added that the film may be set in Spain, but “it’s not about Spain.”

If you are tired of waiting for a new Wes Anderson film, you are in luck. The French Dispatch is set to premiere in a few weeks at Cannes. It will be released nationwide in the US on October 22. This will be the third collaboration between Anderson and Swinton. Joining her are Benicio del Toro, Adrien Brody, Léa Seydoux, Frances McDormand, Timothée Chalamet, Lyna Khoudri, Jeffrey Wright, Mathieu Amalric, Stephen Park, Bill Murray, Owen Wilson, Liev Schreiber, Elizabeth Moss, Edward Norton, Willem Dafoe, Saoirse Ronan, Christoph Waltz, Jason Schwartzman, Henry Winkler, and Anjelica Huston lead a hefty and robust star-studded cast.

Again, you can catch The French Dispatch on October 22 unless you are a lucky duck and get to see it in France.