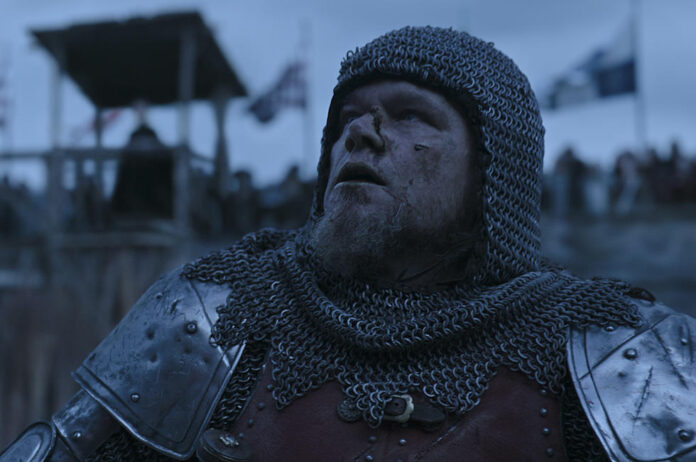 After a busy 2017 in which he directed both Alien: Covenant and the troubled All the Money in the World, Ridley Scott is back with perhaps his most ambitious film in years. The Last Duel is based on the true story of France’s last sanctioned duel, and it will pitt Matt Damon against Adam Driver in a 14th-century story of vengeance, honor, and sexual abuse.

Penned by Damon, Nicole Holofcener (Can You Ever Forgive Me), and Ben Affleck who also takes a supporting role, The Last Duel centers on knight Jean de Carrouges who challenges his squire Jacques Le Gris to a duel after his wife accuses Le Gris of rape. Jodie Comer, who also be seen later this year in Free Guy, plays Carrouges wife, with Affleck as a local Count.

A long time in the works, there was once a time when Francis Lawrence (The Hunger Games) was planning to direct it. That fell through, and Scott took over in 2019. Filming was delayed while the world was shut down, and now it’s ready to open just in time for awards season on October 15th.

The historical epic is a cinematic and thought-provoking drama set in the midst of the Hundred Years War that explores the ubiquitous power of men, the frailty of justice and the strength and courage of one woman willing to stand alone in the service of truth. Based on actual events, the film unravels long-held assumptions about France’s last sanctioned duel between Jean de Carrouges and Jacques Le Gris, two friends turned bitter rivals. Carrouges is a respected knight known for his bravery and skill on the battlefield. Le Gris is a Norman squire whose intelligence and eloquence make him one of the most admired nobles in court. When Carrouges’ wife, Marguerite, is viciously assaulted by Le Gris, a charge he denies, she refuses to stay silent, stepping forward to accuse her attacker, an act of bravery and defiance that puts her life in jeopardy. The ensuing trial by combat, a grueling duel to the death, places the fate of all three in God’s hands.