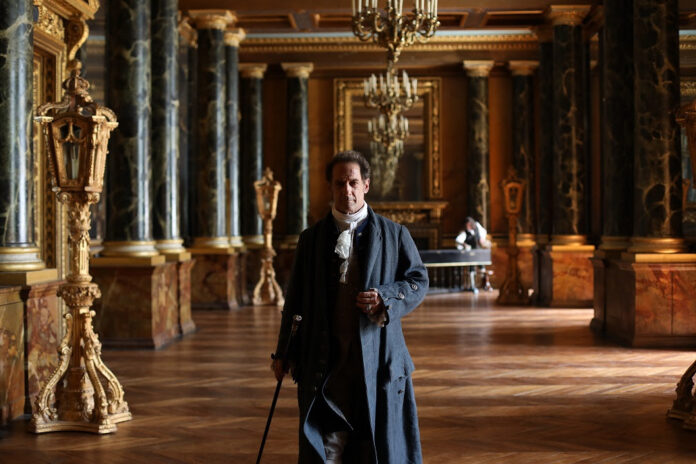 Casanova, Last Love is a french film (with English subtitles) depicting the brief but passionate affair of Giacomo Girolamo Casanova and Marianne de Charpillon, who seduced his womanizing heart. The trailer immediately peaks my curiosity as I am drawn to 18th century European culture, the costumes, and scenes of steamy, hot sex. A real life lotus den for an era still prominent to this day. Director and screenwriter Benoît Jacquot is the man behind camera. His other films include La désenchantée, A Single Girl, Farewell, My Queen, and Three Hearts. Jacquot co-writes this film with Chantal Thomas and Jérôme Beaujour.

Casanova is a famous Italian adventurer known for his affinities for sexual pleasure, gambling, and escaping prison among many other things. He arrives in London, England having been recently exiled from Paris, France. Living in a new city completely foreign to him, Casanova (Vincent Lindon) finds the English life repulsive. He observes residents openly engaging sexual activity in carriage rides and use park pathways as an outhouse. Sticking to his Parisian upbringing, he refuses to speak very little English. Being new, he attends social gatherings with the few acquaintances he knows in town. It’s at a few of these events Casanova sets his eyes on a beautiful young prostitute, Marianne de Charpillon (Stacy Martin).

Despite warnings from friends already scammed by her, Casanova becomes infatuated with Marianne. It gets to the point where he loses interest in all other women. Disregarding the orgy’s and affairs with “princesses” that are easily attainable. The legendary lover is willing to do anything to have her. Charpillon is aware of his eagerness and with plans of her own, toys with his advances. He reluctantly complies with her challenges. Casanova greatly anticipates to ravage the woman he so lustfully desires. He recounts the notable affair at presumably during the time he is writing his infamous memoir, Histoire de ma vie (Story of My Life). As told in flashbacks, Casanova admits to a decades long secret that Charpillon was the one true love of his life.

The production design behind Casanova, Last Love is amazing. The color, style, design of the costumes are stunning. Every house, business, ballroom, park and garden presented are rich with exquisite architecture and props that embody the films euphoric era. Scenes are reminiscent of images brought to life from the masterpieces of french painters Claude Monet and Edouard Manet. Shuffling dresses, the squeak of shoes, horses trotting on gravel and stone, clinking dishware, to the simple notes played on a harpsichord are prominent yet subtle.  A song sung by opera star, La Cornelys (Valeria Golino), the orchestra of stringed instruments, and an all blind Irish band is the musical soundtrack that reflect the setting and cast’s emotions. These elements are very pleasing to observe and appreciate throughout the film.

Casanova, Last Love has little dialogue that hangs primarily on white noise for mood. Long pauses and the over use of white noise can be underwhelming and drag on too long. Casanova is a man who’s entire life thrives on his deepest ambitions and desires. A man rich in his 30’s with experience who’s high on life and full of…intent. With that being said, I would have expected Vincent Lindon to bring out those aspects when playing Casanova. His character portrayal fell flat and felt empty. There are uncomfortable moments that looked as if he was unsure of how to properly channel those qualities. An unfortunate drawback that displays Casanova looking invisible at times.

Stacy Martin is perfect as Marianne de Charpillon. She knows exactly who she is and what her truest intentions are. Charpillon is quite business savvy for a 17 year old girl of her trade and a badass in her own way. Martin (and as Charpillon) make Lindon and his Casanova persona look like amateurs. She refuses to be the mouse in the proverbial “cat vs. mouse” game, choosing to be the lion instead. Martin steals the show as she fully embodies the lover’s quest to the fullest detail. She is of a wonderful talent that extends way beyond her years.

It’s no spoiler that Casanova’s heart is broken and still pines for the woman he couldn’t have. I get it but I’m not entirely sold on his melancholy. Here’s the gist..who’ve got a 30 year old man who’s mastered the art of womanizing vs. a young woman already used to being the pawn (on the game board of) ladies who’ve ALWAYS been womanized. Is he genuinely upset for losing her the way he did? Or is he really upset with himself for playing a game he’s spent his entire life mastering AND lost to a woman who played it (and him) better? Based on my observations, my opinion leans to the latter part of the two questions asked. Who knows, it could be yes to both. I recommend watching the film, where you can decide for yourself.