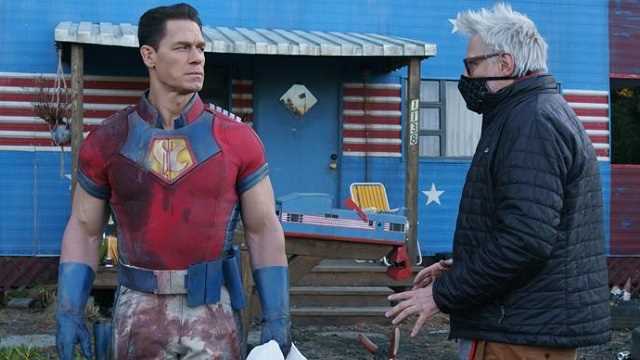 When The Suicide Squad opens in just over a month, it will be only our first introduction to John Cena as Peacemaker. The character, a sort of dark twist on The Punisher, will have his story continue in an HBO Max series from James Gunn and now Empire Online has our first look.

Cena’s a bloody mess in the first Peacemaker image, seen here chatting with Gunn who will direct five of the series’ eight episodes. We still don’t know any story details, although that’s probably so nothing from The Suicide Squad gets spoiled. One thing we can probably count on is that Peacemaker will be a douchebag on the big and small screen.

“Peacemaker’s a piece of shit,” Gunn says. “He’s not a good guy. And he wears the goofiest costume you’ve ever seen in your life.”

“Peacemaker has a clear set of ideals that I find really interesting. You know: ‘I want peace no matter how many men, women and children I need to kill to get it.’ Sounds like nonsense, but it also makes a lot of sense. And you see in John’s performance how he does not feel good about it – something I thought was the seed of an entire eight-episode show.”

Gunn describes the series as a “big science-fiction story” and will in some way have Peacemaker contending with a world that has Batman, Superman, and Aquaman in it, something that is not easy for him to do.

Cena adds, “This guy is a loud, obnoxious, bro-ey douchebag. That sucks. But why? At what point did he become such a douchebag and what does that mean? There’s a lot to dive into there.”

The first look at James Gunn’s ‘PEACEMAKER’ series has been released.

The 8-episode series premieres in January 2022 on HBO Max.