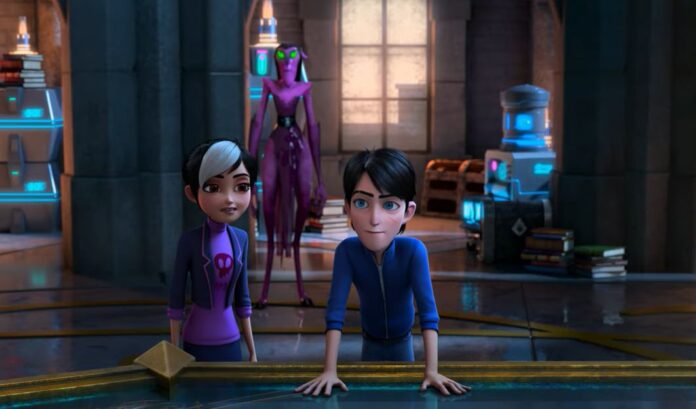 You know what I love about children’s entertainment? It doesn’t have to make sense, it just has to be fun. With adult films and TV there’s so much emphasis put on plausibility and logic, it can’t just be cool or fun. The trailer for Trollhunters: Rise of the Titans, a feature film spin-off of the popular Netflix series by Guillermo del Toro, proves this point. There’s no other way that you get a film that centers on a motley crew of humans, trolls and aliens (with giant robots) fighting giant Titans, all with magic sprinkled throughout. That’s exactly what it looks like we’ll be getting with the upcoming film which is the first feature in the series that’s been around since 2016. Following the previous three series, Trollhunters: Tales of Arcadia, 3Below: Tales of Arcadia, and Wizards: Tales of Arcadia, Trollhunters: Rise of the Titans sees the characters from it’s predecessors join forces to save Arcadia from an order of Titans who want to seize control of the magic that binds them all.

One thing is for sure, Guillermo del Toro really likes the whole kaiju fighting giant robots thing. Sure, these aren’t exactly kaiju but the effect is the same. I’ve passed over the Trollhunters series countless times while looking for something to watch with my kids, after seeing the trailer below I’m regretting that decision. The animation looks amazing and, as crazy as the story seems to be, it looks like a ton of fun. Check out the trailer below and look for Trollhunters: Rise of the Titans on Netflix, July 25th, 2021