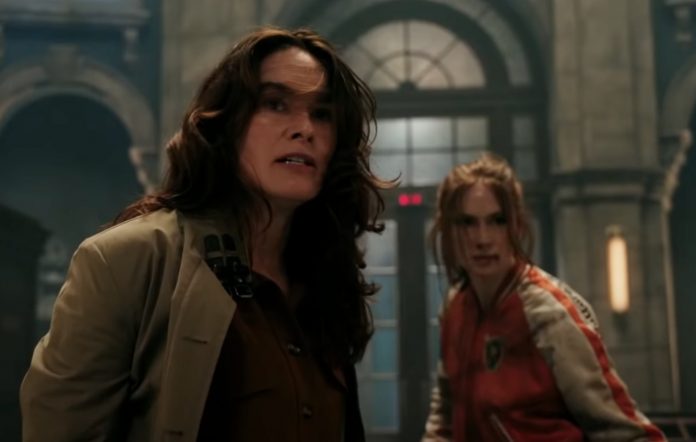 Some of the baddest women to ever grace the screen join forces in Gunpowder Milkshake, an action flick that’ll come blasting onto Netflix later this summer. Lena Headey and Karen Gillan star as an estranged mother/daughter duo of assassins who must work together when a mission goes bad, putting themselves and an 8-year-old girl in the middle of a gang war. Carla Gugino, Michelle Yeoh, and Angela Bassett co-star, along with Paul Giamatti as the villain, of course.

The film is directed by Big Bad Wolves director Navot Papushado, who explained to IGN all of the movies that influenced Gunpowder Milkshake…

“Maybe it will be easier to mention a few of the filmmakers whose movies inspired Gunpowder. Filmmakers such as Akira Kurosawa, Jean Pierre Melville, Alfred Hitchcock, Sergio Leone, Buster Keaton, Michael Mann, Sam Peckinpah, Jackie Chan, John Woo, Ang Lee, Martin Scorsese, Steven Spielberg, Quentin Tarantino, Jacques Demy, Luc Besson, Robert Zemeckis and many, many others. I guess you can say that Gunpowder is the fusion between the classics I adore so much and the movies I grew up watching as a kid in the ’80s and ’90s.”

Gillan chimed in and noted the many similarities to John Wick, while still managing to be its own thing…

“It sort of exists in a fairly similar world to John Wick. They’re going to pick up their weapons from a place and using code words,” Gillan said. “I would say the film is pretty different tonally. It’s definitely slightly weirder. It’s more bonkers. It’s really stylized. So I would say that there’s like a level of Tarantino feel to it. Maybe like Kill Bill more so than John Wick.”

Synopsis: Sam (KAREN GILLAN) was only 12 years old when her mother Scarlet (LENA HEADEY), an elite assassin, was forced to abandon her. Sam was raised by The Firm, the ruthless crime syndicate her mother worked for. Now, 15 years later, Sam has followed in her mother’s footsteps and grown into a fierce hit-woman. She uses her “talents” to clean up The Firm’s most dangerous messes. She’s as efficient as she is loyal.

But when a high-risk job goes wrong, Sam must choose between serving The Firm and protecting the life of an innocent 8-year-old girl – Emily (CHLOE COLEMAN). With a target on her back, Sam has only one chance to survive: Reunite with her mother and her lethal associates, The Librarians (MICHELLE YEOH, ANGELA BASSETT and CARLA GUGINO).

These three generations of women must now learn to trust each other, stand up to The Firm and their army of henchmen, and raise hell against those who could take everything from them.