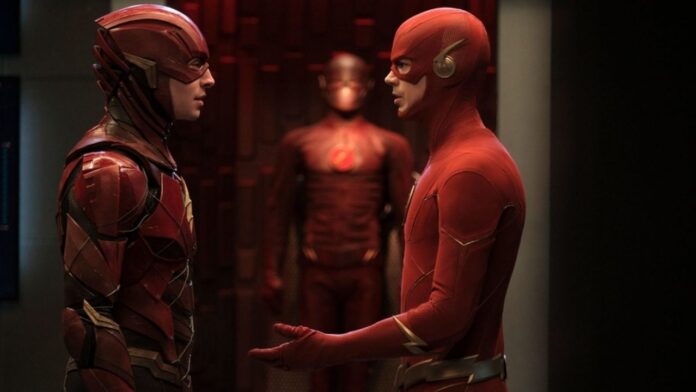 Does one good turn deserve another? You’ll recall that Ezra Miller suited up as The Flash in the Arrowverse‘s Crisis on Infinite Earths crossover so he could come face-to-face with Grant Gustin’s version of the Scarlet Speedster. Well, now a rumor from The Illuminerdi says Gustin will pay that visit back by coming to the DCEU as part of The Flash‘s upcoming movie.

If true, Gustin’s role is said to be little more than a “cameo appearance”, which makes sense. It’ll probably be just as long as Miller’s brief role and probably framed in a similar manner. They are, after all, going through a pretty familiar crisis dealing with multiple alternate universes and different versions of heroes we know and love.

I’m curious to see if WB tries to draw distinct connections either to the Arrowverse or HBO Max shows. I don’t think it’ll go beyond a further acknowledgement they are all part of the same multiverse, but you never know.

Meanwhile, director Andy Muschietti has dropped a close-up look at the new costume Ezra Miller will be rockin’ in The Flash. We saw some concept art of it during last year’s DC Fandome, but this offers a more detailed image and should quiet those who weren’t digging his homemade suit in Justice League.