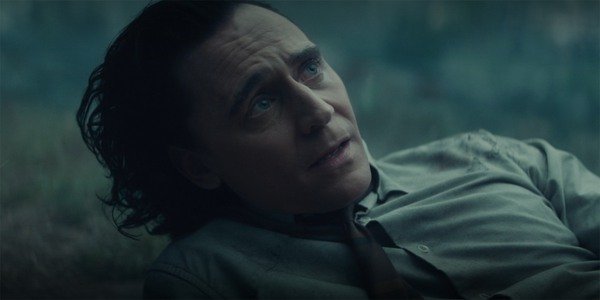 That’s all I had to say following today’s incredible, mind-blowing episode of Loki, titled “The Nexus Event”. There were so many cameos (Sif kneeing Loki in the nuts!!) and shocking moments (poor Moebius!!!) and reveals (The Time Keepers are robots??) that it was exhausting. And then the mid-credits scene happens and it wakes you the fuck back up.

So first of all, Loki (Tom Hiddleston) gets pruned by Renslayer (Gugu Mbatha-Raw), which should be the end of him for good. But it’s not, of course. I’ll be honest, my first thought was that Hiddleston was done with the MCU and they’d run with the Sylvie version of Loki from now on. But nope, Loki arrives in a desolate landscape and wonders if he’s finally made it to Hel with the other dead Asgardians.

However, Loki is then met with a voice that tells him he will definitely die unless “you come with us.”  When we finally see them, it’s Richard E. Grant as the classic version of Loki. Straight out of the comic book pages, rocking the ugly green and yellow costume with the outlandish horned helmet.

Kneeling in front of him, and holding a pet lizard, is Kid Loki, played by Jack Neal. Why is he stroking a lizard with a similar helmet as the god of mischief? Who knows? And also in the group is Deobia Oparei as the hammer-wielding Boastful Loki.

I can’t tell what those buildings are in the background. Are they supposed to be Avengers Tower? I’m not sure. Whatever the case, it looks like the various pruned Lokis will have to team up if they’re going to survive whatever that place is.

With only two episodes left it feels like there’s a lot of ground left to cover. So who is really running the TVA? What happens to Sylvie and Renslayer? Is this what finally turns the latter into a villain and possible love interest to Kang the Conqueror? I can’t wait to find out.