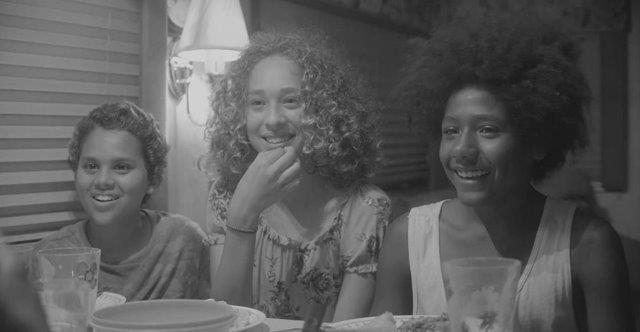 Often it feels like Hollywood has a nepotism conundrum, where it just seems that there are pretty much dynasties nowadays of filmmakers/actors putting their kids (sometimes unwarranted) on in a never-ending cycle of churning them out, almost like a factory. Now with director Alexandre Rockwell’s latest film, Sweet Thing, that’s not necessarily a thing to criticize. The family dynamic that the film warrants almost requires everyone to be related as they go through their drama together as a family.

Billie (Lana Rockwell), who is named after singer Billie Holiday (which plays a significant part of Sweet Thing), and her brother Nico (Nico Rockwell) live a unique life with their father Adam (the always great Will Patton). After he and their mother Eve (Karyn Parsons) split, he’s a depressed alcoholic. As a result, Billie and Nico pretty much take care of each other. Living in dismal poverty, they try their best to scrape by. The film opens during Christmas time to showcase what happiness looks like for their family, even though it has its moments reminding them that their life is frustrating as their mother Eve is consistently inconsistent, even on Christmas Day.

Unfortunately, Adam’s alcoholism hits its peak, and their part-time mall Santa father has to go through mandatory rehab, forcing the siblings to stay with their mother and her textbook-douchebag boyfriend at his beach house. Now if you’re a fan of Hillary from The Fresh Prince of Bel-Air, Karyn Parsons plays the exact opposite. She’s also alcoholic, abusive, and all around just doesn’t give a crap about her kids and prefers her physically abusive boyfriend over them. It’s not so bad in this beach town as Billie and Nico befriend Malik (Jabari Watkins), a local kid who also is wrestling with his own issues, and Billie and he easily become friends. After a few creepy private encounters with Eve’s boyfriend, Nico and Billie run away with Malik. Where? Nowhere really, they just all need to get away. Malik says his father is in Florida, so off they go from Massachusetts to Florida in a stolen car.

Here, Sweet Thing turns into a road trip film as the trio start to find themselves with their newfound freedom. While what they are doing isn’t exactly legal, there’s an excitement that fills them as they break into wealthy people’s vacation homes and try on other people’s clothes and raid their fridges. They aren’t excited about being “outlaws,” but instead, because they finally have found a sense of a normal family, which is mainly because they don’t have to deal with their incredibly unpredictable and unreliable parents. As they go on their adventures, they share details with each other about their lives and bond in ways they never had before. They even meet a couple hanging in a mobile home park that shows them that even strangers can feel more like family than their toxic family. As their journey comes to an abrupt end, they are forever changed for the better, and so is everyone else in their family

One thing that makes Sweet Thing feel timeless is that there’s no unique identifier for where or even when this story takes place. While much of the film takes place in a beach town in Massachusetts, it can feel almost like anywhere. Instead of dealing with touristy things like most films do, Billie and Nico meet a local person from that town to go on their adventure, making the film more homely, absent of all the glitz and glamour of such a location. Also, there are no identifiers as to when the film is, there wasn’t one cell phone spotted. It could be in the 70s, it could be last week.

Filming almost exclusively in black and white gives Sweet Thing a complete indie vibe (partially funded via Kickstarter). There are some scenes that are in full-color contrast, especially the scenes where Billie imagines the actual Billy Holiday on her adventures with her, but for the most part, the lack of color in the film gives it its own sense of character. The cinematography by Lasse Ulvedal Tolbøll is also outstanding. There are a few moments out of the blue where subtitles appear that are a little distracting, but overall, this is a beautiful film despite the subject matter.

Finally, the best part of Sweet Thing is the performances. Will Patton shines as their sad, alcoholic father Adam, and Karyn Parsons invites you to hate her as their ridiculously abusive mother Eve. It must have been hard for her to act to terribly towards her real-life children in many of the scenes. It’s clear that naming the parents “Adam and Eve” was done on purpose. But unlike their biblical counterparts, Billie and Nico are their siblings’ keepers. Both Lana and Nico Rockwell are completely awesome in their performances, especially Lana Rockwell as she’s the heart and soul of Sweet Thing. While Alexandre Rockwell kept this film mostly all in the family, it’s better for going that route.