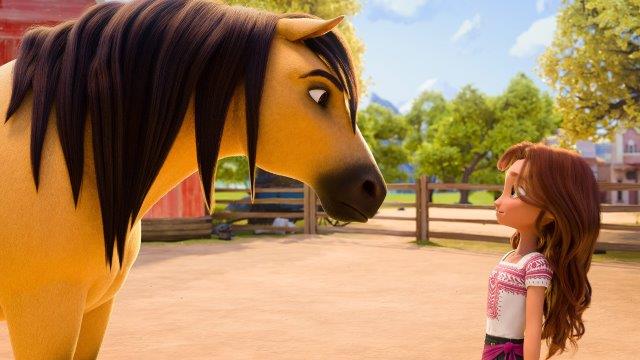 It’s kinda crazy that Dreamwork’s Spirit franchise has been going strong for 19 years! When first introduced in 2002, Spirit: Stallion of the Cimarron was considered a classic. Centering on a wild horse’s perspective, the OG film followed the titular character as he and his pack resist capture from horse wranglers. $122 million later, it has spun into a lucrative franchise for Dreamworks. Thanks to their partnership with Netflix, 3 separate spin-off television series have been produced. Sprit: Riding Free lasted more than 8 seasons, Riding Free: Pony Tales had two seasons, and Riding Free: Riding Academy has had two seasons as well. In addition, there has been a Christmas special on Netflix as well as an interactive special as well. Based on the sheer volume of movies and TV shows based on the original movie, we should be tired of it… right? Well, think again as Dreamworks did a reimagining/remake of Spirit: Riding Free in their new feature film Sprit Untamed.

If you haven’t watched the Netflix series, Spirit Untamed focuses on Fortuna Esperanza “Lucky” Prescot (Isabela Merced), a young girl who was orphaned at a young age due to a horse-riding accident that killed her mother and then alienated her father. Spending most of her life with her aunt Cora (Julianne Moore), Lucky has not necessarily been lucky. Her grandfather is a “somebody,” and given his political life, she can’t enjoy the simple things a young girl her age takes for granted. After yet another fiasco she inadvertently creates for her family, her aunt Cora escorts her across the country to go spend the summer with her father Jim (Jake Gyllenhaal), who she hasn’t seen for 10 years.

On the train ride heading to her father, she notices a group of wild horses roaming the countryside that capture her awe and fascination. After causing yet another escapade on the train in her excitement, she has found something that actually captivates her interest, especially when she arrives in town as pretty much the entire town’s culture is horse-based. After a brief period of getting to know her dad she hasn’t seen in ages, she befriends people around town. She takes a liking to Pru (Marsai Martin), Abigail (Mckenna Grace), and she befriends the same wild horse she saw on the train. It takes her a while, but soon enough, she and the horse (that, of course, she names “Spirit”) build a rapport.

At the same time, there a group of horse wranglers led by Hendricks (Walton Goggins once again playing Walton Goggins) who are capturing wild horses for overseas sales. The wrangling group is at first there with Pru’s father Al’s (Andre Braugher) blessing helping to tame Spirit and a few other wild horses, but after he sees how they are mistreating the horses they catch, he kicks them off his ranch. Later on, Lucky finds Spirit out in the wild and finds all of his pack. Unfortunately, the wrangling gang also finds them.

This leads Lucky to team up with Sprit, and her friends to go out and rescue the captured horses. The plot is a fairly predictable paint-by-numbers story onward as the trio get on their horses and go on the adventure to rescue the horses and outsmart the bad guys. Unfortunately, if you have seen any of the infinite number of episodes of the Netflix series, you pretty much are already familiar with how the story goes, so it’s not necessarily reinventing the wheel.

But there are some bright spots in Sprit Untamed. The animation is beautiful, exactly what you would expect from Dreamworks after all these years. While there is a large amount of stunt voicework with big-name actors (who all do a great job, especially Jake Gyllenhaal), the story focuses primarily on Lucky and her newfound friends, so the extra famous folks don’t overshadow Isabela Merced, Marsai Martin, and Mckenna Grace as they go through their adventures. While the original film was told from the perspective of Spirit the horse complete with inner monologues, that doesn’t mean in this iteration the silent version of the animal doesn’t have his own version of charm and character moments. Ultimately, this will be a hit with kids and parents will just have to grit their teeth at theaters and enjoy Sprit Untamed for what they can get out of it as well.