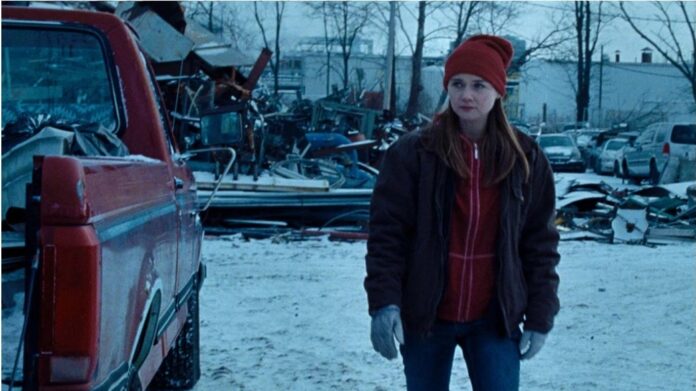 Holler is set in a rural pocket of Southern Ohio where American manufacturing and opportunity are drying up. A determined young woman finds that she must balance school, grueling work and a broken family while trying to survive life’s unrelenting battles to avoid sinking into poverty. Alongside her older brother Blaze, Ruth Avery joins a dangerous scrap metal crew in order to pay for rent and basic necessities. Making her feature film debut and local Ohio native is writer and director, Nicole Riegel (Variety’s 10 Directors to Watch 2020).

Ruth Avery (Jessica Barden ,The End Of The F***king World) is in her senior year of high school and is grappling with what to do after graduation. Does she leave the home she knows to pursue a better life or stay local with her family who are barely keeping afloat? Ruth and her older brother Blaze (Gus Halper, Cold Pursuit) are left to take care of themselves when their drug addicted mother Rhonda (Pamela Adlon, King of the Hill and Californication) ends up in jail. Blaze (Halper) is seen at times visibly struggling to mentally fill the parental role but he couldn’t be more perfect. The love and tenacity he has while looking out for his younger sister is quite frankly, heroic. With notices piling up and no running water, the siblings scavenge through trash to trade cans for cash at a local junkyard. Even then, the payout is minimal.

Ruth gets an unexpected letter in the mail that says she’s been accepted into college and is upset that Blaze sent her application behind her back. She’s reluctant to go but knowing they need more money, she and her brother attempt to steal scraps at the very yard they would intend to sell back to. Needless to say, that idea doesn’t go as planned. The junkyard boss, Hark (Austin Amelio, The Walking Dead) is sympathetic to their situation and makes them an offer they can’t afford to lose. Ruth and Blaze spend the brutal winter working the scrap yards during the day and stealing valuable metal from the once thriving factories by night. Ruth realizes that the ultimate cost of an education for a girl like her may be more than she bargained for. She soon finds herself torn between a promising future and the family she would leave behind.

Holler captures grit and authenticity that centers around real issues that teenagers face when transitioning from adolescence to adulthood in dying industrial towns throughout America. Barden is powerful and sassy, portraying a girl who’s had to take on a lot at an even younger age while fanning her way out of a potential drug addicted and/or young pregnancy dark cloud that could eventually, consume her. Ruth (Barden) tries to maintain a relationship with her mother but proves to more difficult to withstand when it’s clear they won’t see eye to eye. She finds solace with Linda (Becky Ann Baker, Hunters and Freaks and Geeks) who is a close friend of her mothers. Linda is manager at one of the last remaining factories in town and is quite literally, an awesome ass mother figure to everyone. She is loving, respectful and a tough as nails woman who is a wonderful asset to a small town filled with diminishing hope.

Images of smoke stacks and dilapidated buildings are scattered throughout the film. The atmospheric ambiance projected is isolated, bleak, and saturated in gray tones. A beautiful use of visual and emotional context that really embodies the full gravity of what individuals affected by these overwhelmingly frustrating problems are subjected to. Although, some people may think that these elements could come across as slow and mundane. Holler is a poignant story with a talented cast, bringing truth to light of what’s happening beneath our crumbling and left to rot towns. I say, it’s worth a watch.

Holler will play in select theaters and on Demand/Digital on June 11th.

Review: ‘The New Romantic’ Doesn’t Know What it Wants to Say