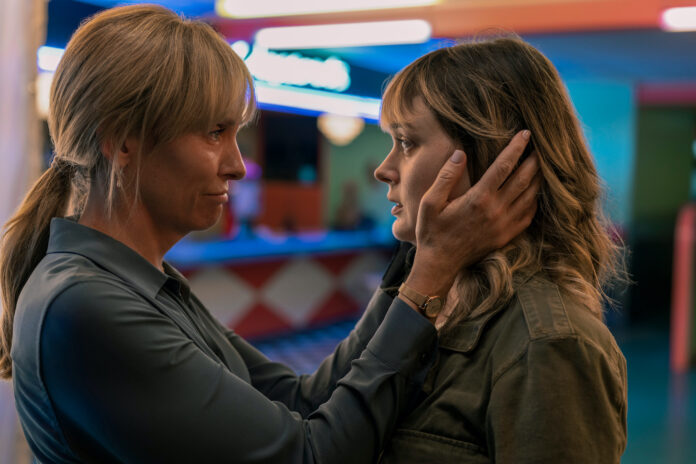 How well do we know our parents and how does their unknown trauma impact our own identities? That’s the question director Minkie Spiro and showrunner Charlotte Stoudt explore in Netflix’s newest thriller Pieces of Her. A slow-burning crime drama, the show follows Toni Collette as a mother who has been less than honest with her daughter, played by Bella Heathcote. While Collette always brings her A-game to every projet she is attached to, weak dialogue and production issues pull the quality down.

At the center of the story is Collette’s Laura Oliver and her relationship with her 30-year-old daughter Andy, who works as a 911 operator on their small Georgia Island. Their dynamic is strained as Laura still keeps Andy at arm’s length despite her recent recovery from cancer. Laura is recently divorced from the still supportive Gordon (Omari Hardwick) and trying to encourage her daughter to leave the island and go back to New York.

During one such discussion, a gunman enters the restaurant Laura and Andy are eating at and starts shooting up the place. Instead of hiding and trying to protect herself, Laura tries to reason with the shooter who eventually stabs her straight through the hand. In retaliation and on instinct, Laura kills him.

In shock and facing media attention, Andy’s suspicions about her mother’s past are raised even further when someone breaks into her mother’s home to kill her. Forced to flee, Andy goes against her mother’s wishes and starts to unravel Laura’s past which includes a corrupt politician brother, an assignation attempt, a cult, and a mysterious and charismatic stranger who may or may not be Andy’s real father.

While Collette squeezes everything she can from a stale script, Heathcote’s Andy makes every mistake a thriller protagonist can make. There’s nothing intriguing about her character and her line deliveries come off as dumb rather than naive.

Over the first four episodes or so, we only see flashes of Laura’s past. The few glimpses we do get are often repeated information that we have already learned through dialogue in the main timeline. While Heathcote’s doe-eyed Andy drags the plot along, the moments focusing on Laura’s previous life hold the most potential.

Jessica Barden stars as Jane, Laura’s younger self whose complicated relationship with her controlling millionaire pharmacy tycoon father (Terry O’Quinn, Lost) pushes her into the arms of a left-winged radical. Pieces of Her is based on Karin Slaughter’s 2018 best-seller of the same name and features a sex-assault storyline that the TV adaption does not hint at. Because of this, Jane’s actions don’t always feel justified and her relationship with the radical Nick (Joe Dempsie) feels rushed. Dempsie, who is known for playing Gendry on Game of Thrones and here looks like a combination of Ewan McGregor and Charles Manson, gives Nick a dangerous quality, pulling both Jane and the audience in. Barden, however, gives a compelling performance that sometimes feels flat due to her American accent.

The twist in the show’s final 30 minutes feels surprising and original. However, because it occurs so late in the game and the first few of the show’s initial episodes felt unneeded and long, the ending feels rushed.  Charlotte Stoudt’s script fills in the blanks for you and fails to pack the psychological punch you want it to. By the final episode, the show’s inciting incident is all but forgotten, feeling like a missed opportunity, like Pieces of Her itself.