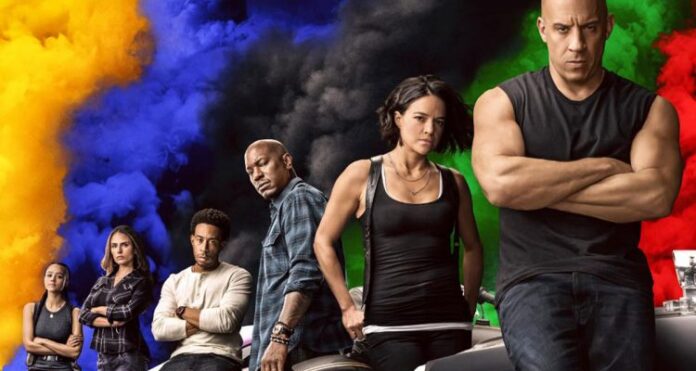 “It’s not what’s under the hood. The only thing that matters is who’s behind the wheel.”

The wisdom of Dominic Toretto (Vin Diesel) has fueled Fast & Furious for two decades (!!!), and while it reflects his views on the racecourse that is life, he might as well be talking about the franchise as a whole. As each film continues to outdo itself with one gravity-defying stunt after another, defying the odds to evolve from a simple west coast car racing movie to a globe-hopping international $1B blockbuster, what separates the top-end from the rest is the man behind the camera. Justin Lin, the director behind the franchise’s complete reimagining, is back for the fifth time after taking an eight-year hiatus. Lin’s return for F9: The Fast Saga is a much-needed shot of adrenaline and proof that nobody can steer these movies quite like he can.

In complete contrast to the overdone and somewhat dull Fate of the Furious, the steady thematic drumbeat about “family” feels well-earned in F9. At this point, you are either down with these movies or not, and nothing is going to change that, but what’s great about this one is an acknowledgment to those who have stuck around. Lin’s return is part and parcel to all of that. Appropriately, F9 has stronger connections to Lin’s first movie in the franchise, my beloved Tokyo Drift, with characters from that seemingly random racer emerging to play key roles, including one who emerges from the grave after being thought dead. The personal stakes have always been hammered home for us but they’ve never felt quite as prescient as they do in F9, a credit to writers Lin and Daniel Casey.

There’s also an acknowledgment that Fast & Furious has become, ironically enough, the cinematic equivalent of pro wrestling. With the introduction of ex-WWE champion John Cena into the mix as Dom and Mia Toretto’s (Jordana Brewster) estranged brother Jakob, F9 is what Vince McMahon would call a soap opera for dudes. The wildly theatrical family squabbles that morph from love to hatred and back again in the span of a single movie are all here, along with a healthy concession how ridiculous it all is. That self-awareness was sorely missing in Fate of the Furious. If you’re going to have a movie in which people return from the dead with alarming regularity, magnet cars decimate entire cities, and a second-hand vehicle rockets into outer space, please don’t take yourself so seriously!

The arrival of Jakob triggers a flashback to the ’80s, and the event that changes a young Dom (played by spitting-image actor Vinnie Bennett) and his brother (played by Finn Cole) forever. Where else could that be but on a race track, where their father’s fiery death unleashes Dom’s violent side in defense of his family. But it also led to a split between Dom and Jakob, literally driven home in a race to decide who stays and who goes. But now Jakob is back, as an international badass spy or something (they say “spy”, but none of these folks are very covert), and he’s got a chip on his shoulder. Plus, he’s on the hunt for some doomsday weapon that he’ll either use to destroy the world or sell or…something. Who really knows or cares?

All we need to know is that Jakob and Dom got beef, and it’ll have the crew literally racing between exploding landmines, swinging their cars across vast mountains thousands of feet in the air, and surviving assaults from hundreds of armed, supposedly well-trained soldiers. In fact, the feats are so ridiculous a running gag involving Tyrese Gibson’s comic relief character Roman Pearce suggests they all might be superheroes, and thus immortal. Who’s to say they aren’t? I’ll put the shit these people accomplish against anything the Avengers have done.

Of course, a lot of it is silly as all Hell. Jakob ziplines through London like he’s away at camp, and of course, Tej (Ludacris) and Roman rocket off the planet in a makeshift car held together by spit and bailing wire. While most of the action is off-the-wall amazing, there’s some are quite familiar. But I think that’s unavoidable after nine movies of vehicular destruction. It’s also sort of the point, too. The crazy antics are always going to be there, but what makes these movies is how much investment we have in the characters.

F9 shows us a side of Dom that we haven’t seen in a very long time. No longer living his life a quarter mile at a time, Dom has settled down for peace and quiet with Letty (Michelle Rodriguez) and his young son Brian (played by Diesel’s real-life kid). He’s spent all of these years fighting for family, but now his family has grown and he’s got a legacy to pass on. Of course, when the old team comes calling, Dom is right there to put all of that aside. And the whole gang is here, too. Letty gets a lot more to do this time, as she’s never been able to settle down like Dom could. Mia finally gets her shot to kick some ass, no longer relegated to the sidelines behind Brian (the late Paul Walker, his character referenced frequently); Sung Kang’s Han is back and as enigmatic as ever, along with Charlize There’s villainous techie Cipher, Kurt Russell’s CIA spook Mr. Nobody, and Helen Mirren’s Queenie Shaw for a riotous getaway through the Edinburgh streets. And that’s not all, either. F9 truly feels like a family affair, designed to pop fans with so many callbacks to the past, some of which are too good to spoil.

For many people, F9 is the movie they’ve been waiting to make their return to theaters. You won’t be disappointed. You’ll relish the deafening roar of the engines, the blast of the explosions, the boom of giant magnets, Dom’s growl as he literally pulls a building down. After a couple of so-so efforts, I can say that F9 is a barnburner and return to form for a franchise that isn’t close to retiring to that great junkyard in the sky.