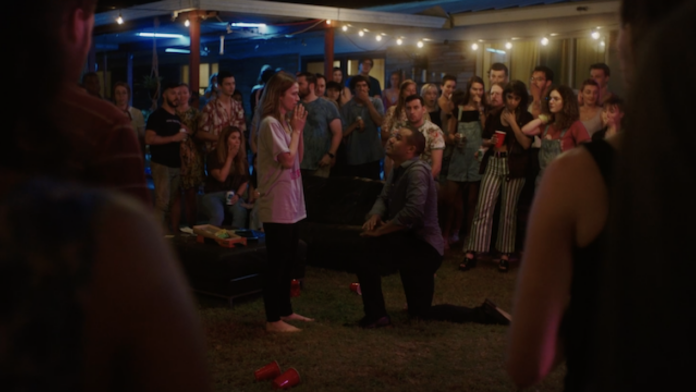 What is it about the party movie that makes it the perfect backdrop for the exploration of life’s many twists and turns? It’s the feeling of freedom that comes with being around so many others who are going through the same thing, and looking to wash away their problems for one night. Of course, it rarely ever goes quite as planned, and that’s what the new film The Get Together is all about.

We’re happy to debut an exclusive clip from The Get Together, which features Damien (Artist) making an awkward wedding proposal to his longtime girlfriend Betsy (Braddy) in front of a stunned audience.

Will she say yes? You’ll need to check out The Get Together when it opens on May 14th! Check out the clip plus the trailer below! Our review of the film will be up tomorrow.

The lives of four twenty-somethings intertwine over the course of one Friday night house party in this inventive and hilarious coming-of-age comedy. August, a quirky recent college grad struggling to find her footing in a new town, discovers her roommate and only friend has different plans for the future that don’t include her. Damien and Betsy, a cute couple returning to Austin, bump into an old friend of Betsy’s who invites them out to the party, upending Damien’s secret plan to propose. Caleb, a directionless musician whose life unravels after letting go of the love of his life, suddenly gets a second chance when he runs into her at the party. Each character attempts to navigate the often difficult and hilarious problems that come with growing up in the modern world.

Review: ‘The Get Together’