Home Reviews Jake Review: ‘The Get Together’This Coming-Of-Age Story Shows How Much Can Happen At...
Facebook
Twitter

Life doesn’t always go as planned and August (Courtney Parchman) is finding that out the hard way. She lives in a shitty rat-infested house with her college friend McCall (Luxy Banner). McCall has a stable job and is branching out into other social circles, only adding to August’s anxiety. The two of them moved to Austin after college not knowing anyone. While McCall seems to be flourishing, August is worried that she is being left in the dust. One Friday evening McCall has a work event leaving August to fend for herself. She decides to take on some ride shares for a little extra money and that’s where she meets Caleb (Alejandro Rose-Garcia).

The Get Together centers on Caleb, a musician who is just floating through life. His friends and bandmates are all moving on – having children, going to farmer’s markets, in relationships – the whole nine yards. In the meantime, Caleb is still just getting by. He doesn’t have the same zest for life as he did when he was dating Betsy (Johanna Braddy). He realized that she is the love of his life, but only after it was too late and she was already in New York. 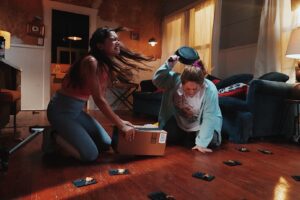 After a gig Caleb makes his way to a party, and as fate would have it, Betsy is attending after being out of town for two years. The only problem is that she is with her new boyfriend Damien (Jacob Artist). If things couldn’t get worse, Damien is also preparing on proposing to Betsy that evening. Realizing Caleb left his phone in her car, August goes into the party. She sees McCall there and sets off a chain of events affecting everyone’s evenings and lives.

The Get Together is directed by Will Bakke who also co-wrote it with Michael B. Allen. The Get Together was first conceived as a 10-minute short of the same name In 2015 by Allen and Bakke. They have evolved this quick video to a feature length film. While The Get Together is still on the shorter side, at an hour and some change, it gave Allen and Bakke more room to expand the concept of the original. They also brought back some of the stars from the 2015 version. Most notably Chad Werner who played the main character in the original and Lucas, Betsy’s old stoner friend, in the new version.

The Get Together almost entirely takes place at a party during that one night. As each character goes about their evening their stories become intertwined. The actions of one unwittingly causes reactions for the others. While this isn’t the first time we have seen films set up like this, Bakke and Allen manage to make The Get Together an enjoyable watch. The cast really propels the film forward, led by Parchman. Parchman’s August is an absolute train wreck and she nails it. The character can’t seem to get out of her own way and her hijinks are a joy to watch. The cast’s efforts and Bakke and Allen’s script combine to make you care about the characters. You feel invested in what they are going through.

The Get Together can be outlandish at times and too neat in others, but Bakke and Allen always manage to reel it in and find a comfortable middle ground. The film is broken into sections, each following particular characters. This really helps move the narrative forward and gives the audience an interesting perspective into everyone’s evenings. There are plenty of hilarious moments throughout The Get Together, led mainly by outrageous party hosts Garrison (Preston Flagg) and Lucas. What kind of party would it be without awesome music – and that’s what we get during The Get Together. Bakke is able to really capture the spirit of raging house parties helping to make The Get Together a good time. It may not be earth shattering or a film you’ll remember for years, but The Get Together is certainly worth a watch, and it’s a quick one at that.